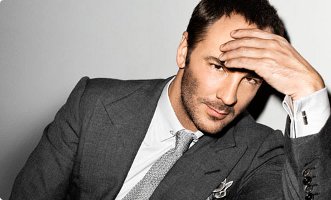 American fashion designer who studied interior design at the New Parsons School, then worked for designer Cynthia Hardwick and later Perry Ellis. Gucci brought Ford on as a designer in the early 1990s and he eventually became Creative Director; after Gucci bought Yves Saint Laurent, Ford took over the direction of that line as well. His designs, which "turned louche sexuality into high fashion",1 are widely credited with revitalizing both lines (Gucci was said to be nearly bankrupt before Ford joined the house). In the process, he became one of the most influential designers of the time. He stepped down in 2004 after a contract dispute.

He has since launched his own beauty and fashion houses and directed a movie, A Single Man.

Tom Ford Black Orchid (2006) was the first fragrance under the Tom Ford label.

See all articles on Now Smell This tagged Tom Ford.

Read Tom Ford: a single man and his address book at The Guardian (about his directorial debut).

Read Tom Ford After Sex: With a new super-high-end men’s store, the former Gucci designer explores who he is without all that libido to sell at New York Magazine.

1. From Tom Ford (Times Topics) at the New York Times.