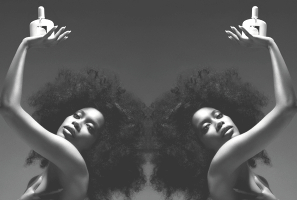 Tom Ford's latest fragrance is White Patchouli, which seeks to reinvent the patchouli of the 1960s:

With its sensuous core of patchouli, Tom Ford White Patchouli perfectly captures the myth of a generation. Surrounded by sleek wood notes, tempered by elegant white flowers, this modern fragrance with retro-classic influences is a sophisticated interpretation of bohemian chic.

Got that? If you put the emphasis on the chic part and downplay the bohemian part, you've pretty much got the picture.

White Patchouli starts a little loud, but it isn't quite so in-your-face (or nearly as sweet) as Black Orchid, and it quiets pretty quickly, in fact, it verges on subdued after an hour or so. Subdued, from Tom Ford? What is the world coming to? I've been very surprised at how many people say they don't smell much patchouli; to my nose, it is front and center from the very beginning right through to the end, but it's that quote-patchouli-unquote stuff that's been cleaned up for modern consumption* (additional notes include peony, bergamot, coriander, jasmine, rose, ambrette seed, blond woods, incense).

Other than the patchouli, what we've got is a softly spiced blended floral. The rose is highlighted at first; later, it smells like generic "white flowers". Later still, we've got some musky woods — and the word sleek is used aptly here: it's a very smooth perfume — and a muted incense note. It's lightly earthy and middling dark, but there's no skank to speak of. 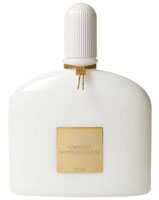 Black Orchid went for romance and glamour, White Patchouli is minimalist chic. You could wear Black Orchid with a ball gown and it wouldn't feel out of place; I'd dress White Patchouli in New York black: trousers, a black turtleneck and boots, big sunglasses, sleek hair, one big piece of jewelry. It's beautifully done, and I find it perfectly accessible, considerably more so than Black Orchid (or even Black Orchid Voile de Fleur). I imagine that some women might find the base notes a bit more masculine than they'd like (there isn't that hefty dollop of vanilla sugar that makes the medicine go down in most of this year's mainstream "woods for women" scents), and by the same token, I should think it would be easily adopted by men.

My first reaction was that for my taste, White Patchouli was perhaps a wee tad too sleek and sophisticated. On later reflection, I've decided that's all to do with my expectations: if some other brand had made White Patchouli, I'd think it was marvelous. After all, tame as it is, it's still considerably more daring than most of what we've seen on mainstream perfume counters this year. But from Tom Ford, well, I don't mind the subdued, really, but subdued + clean? If you can't get a little skank from Tom Ford, where can you get it? But that's quibbling. I would like to hear how it compares to Purple Patchouli, if anyone has smelled both. Like Kevin, I threw my hands up at the 12 Tom Ford Private Blend fragrances, and I still haven't smelled a single one of them on skin. Tsk tsk.

* Per Tom Ford, "We used patchouli orpur, which takes out some of the darker, smoky notes of patchouli". (Women's Wear Daily, 6/20/2008). As near as I can tell, the word "orpur" is of fairly recent coinage. It seems to refer to ingredients that are of natural origin, but that have been molecularly modified, and according to W Magazine, the word is derived from "origin" + "purity". The designation was also applied to some of the ingredients in Sean John's Unforgivable For Men fragrance (the ad copy in that case defined orpur notes as the "most premium and luxurious" ingredients, which is worth the price of admission right there).