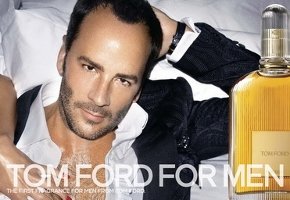 Tom Ford for Men just “arrived” on the perfume scene and the fragrance has taken a back seat to its advertising campaign. Love it or despise it, the ad campaign, photographed by Terry Richardson [ed. note: if you want to see those ads, you'll find links here], has gotten a lot of media attention. I don’t have much to say about the naked oily woman with red lips and fingernails, and the “perfume-bottle-as-penis” images, but thanks to the advertising, when I hear ‘Tom Ford for Men,’ even after wearing the scent, I don’t think about “the juice” — I think about the ads’ glaring photos: a woman’s big boobs and her shaved genitals. Should advertising loom so large over the product being hyped?

Tom Ford for Men sounds complex “on paper”; its ingredients list includes citrus, lemon leaf oil, mandarin zest, bergamot, basil, ginger, violet leaf, orange blossom, grapefruit blossom, tobacco leaf, black pepper, amber, cedar, patchouli, vetiver, oak moss, leatherwood and cypriol. Tom Ford for Men on skin smells much simpler than it sounds. It opens with a fresh citrus accord (bracing, not “cold”) and violet leaf, and proceeds quickly to the heart of the scent, where amber, cedar, ‘leatherwood,’ and especially patchouli, dominate. There are hints of oak moss and tobacco leaf in the fragrance but I don’t smell basil, black pepper, ginger or blossoms; all these well-blended notes may contribute to the slightly sweet and sprightly aspect of the fragrance. After you think Tom Ford for Men has played itself out, it suddenly “sinks” into a darker, murkier world — a world of unclean muskiness.

Tom Ford has made much of his fragrance’s cypriol content. Cypriol is a member of the cyperacae family (papyrus is another member of this plant group) and its roots are distilled to produce a fragrant oil. This oil, also known by the name nagarmotha in India, is used in Indian love potions; a man wishing love, and sex, will anoint his head with the oil. The oil’s scent is described as “woodsy”, “earthy” and “musky.” As I researched cypriol nagarmotha oil online, I read a warning that made me chuckle: “Avoid contact with mucous membranes; severe irritation will result from such contact.” I hope the model in the Tom Ford for Men ad campaign kept the perfume bottle cap securely fastened as she wedged Tom Ford for Men betwixt her thighs, otherwise her open-mouthed photo could mean “OUCH!” instead of “oh!…BABY!…ummm!”

In its Eau de Toilette version, Tom Ford for Men is not “niche” or “original”; it has citrus top notes, violet leaf and oak moss, a good dose of patchouli, woods and ‘musk’ (cypriol) — a classic men’s fragrance formula. That being said, the scent is not dull; there’s a buoyancy and resonance in the fragrance and the ingredients are high quality. I like Tom Ford for Men, but as my perfume ‘collection’ stands, I don’t need it — I have many colognes of its type — most with more interesting touches and stages of development.

Tom Ford for Men has excellent lasting power and respectable sillage (it neither overpowers the person wearing it nor the room that person inhabits). Tom Ford for Men is available in two bottle sizes: 50 ml ($60) and 100 ml ($85). Tom Ford Extreme, which I will review in November, will be sold in 50 ml bottles and will cost $125. For buying information, see the listing for Tom Ford under Perfume Houses.