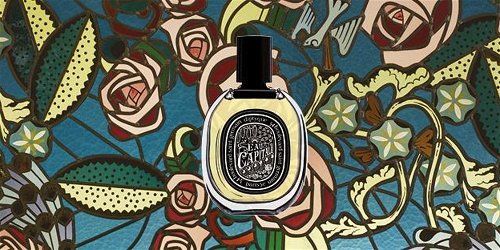 It's February, and Diptyque has launched a new fragrance named Eau Capitale for its permanent collection, as well as a new limited edition scented candle called Paris en Fleur. All these products (Eau de Parfum and solid perfume for Eau Capitale, candles and scented wax oval for Paris En Fleur) are decorated with truly beautiful Art Nouveau-inspired patterns that feature "emblematic roses." I have to admit, this launch is all very well-timed for Valentine's Day, yet it's not your average candy-sweet throwaway treat.

Eau Capitale is an homage to Diptyque's hometown, and it's described as a "lively chypre...a fragrance at once defiant and free," because "only a chypre, a legendary accord in perfumery, could truly celebrate Paris, the city of a thousand faces." I've always thought of as a chypre as a family or a classification rather than accord, and I don't really understand why it's the obvious choice for a Paris-inspired fragrance; but no matter, off we go. Eau Capitale's composition includes notes of bergamot, pink peppercorns, rose, ylang ylang, cinnamon, Akigalawood, Georgywood, Ambrofix and patchouli, and it was developed for Diptyque by perfumer Olivier Pescheux.

Despite all those stylized blooms on its packaging, Eau Capitale is nothing like its older cousin Eau Rose, a shampoo-fresh, honeyed take on the flower (and a Valentine-season launch in its own time). This really is a chypre fragrance — not a take-no-prisoners, old-school chypre, perhaps, but definitely more of a chypre than most mainstream fragrances claiming that title nowadays. Its opening tosses out some dirtied-up citrus but then takes a sharp surprise turn into some strong pink pepper and so much cumin, which is not included in the list of notes but crashes the party nonetheless. I'm not a cumin fan, so I almost surrendered and headed for the bathroom sink, but in the end I was glad I didn't. After a half-hour or so, the cumin quiets down and lets the rose and ylang ylang notes shine through the pepper, and then there's plenty of contemporary oakmoss and a patchouli that's more amber-woody than garden-earthy.

Eau Capitale isn't pretty, but it's striking. If it were a piece of furniture, it would be a vintage wooden farmhouse table whose rough-hewn structure has taken on a mellow sheen over the years. You might not mistake it for a grand old 1940s chypre, but it could probably hold its own alongside lots of 1980s chypres. For comparison, it's bolder and more gender-neutral than rose-accented chypres like Serge Lutens Rose de Nuit or Les Parfums de Rosine Une Folie de Rose. If you're not a rose fan, don't worry; it's more essential that you like dirtied-up wood and moss notes to enjoy this scent.

Eau Capitale has above-average sillage and excellent staying power on my skin: one spritz on my inner arm was still noticeable at the end of the the workday. It's still not as "me" as L'Ombre dans L'Eau or Eau Rose, but it feels like a fragrance that deserves its place in the Diptyque family. 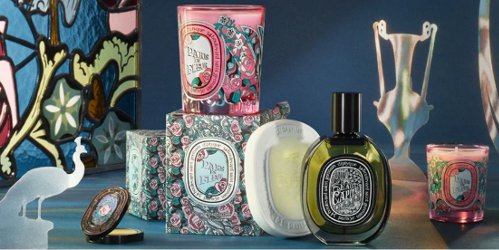