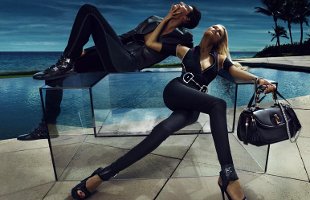 Guccio Gucci (1881-1953) established the Gucci brand in 1920 in Florence, specializing in leather goods. His four sons, and later his grandson, joined the firm, and despite years of family in-fighting and legal disputes, the company grew to become one of the world's premier luxury goods houses.

Gucci was struggling as a company in 1990 when Tom Ford was brought in, first as a ready-to-wear designer, later as Creative Director of the brand. In 2000, Gucci took over Yves Saint Laurent, and Tom Ford became Creative Director there as well. Ford's sexy designs revitalized both houses; when he left in 2004, many speculated that Gucci's glory days were over. The current Creative Director is Alessandro Michele, who replaced Frida Giannini in early 2015. Fragrances were produced under arrangements with Procter & Gamble until 2015, when P&G sold their fragrance business to Coty.

The Gucci fragrances can be found at department stores and online fragrance discounters.

See all articles on Now Smell This tagged Gucci, or take a look at our collection of Gucci fragrance commercials.

Read Will Success at Gucci Be Sexy or Safe? at the New York Times.