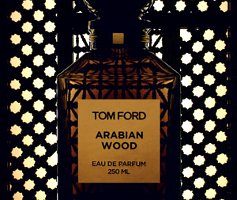 I'm the odd man out on Tom Ford's Private Blend line. I like a few of them, but by and large they strike me as not nearly so interesting or well-done as the (aspirational) prices might imply. I waited a good long time to try them at all, and when I finally worked my way through the initial twelve 2007 releases, the only one I really wanted to own was Oud Wood, and it was easy enough to control that lemming given that Yves Saint Laurent M7 is cheaper and easier to come by. Since then, there have been nine new additions to the line, including the four fragrances in the pleasant but comically overpriced White Musk collection.

Arabian Wood is one of the later additions. It was reportedly created for a "a well-known Arabian sheik" (ok) and was originally exclusive to the Tom Ford boutique in Kuwait. In 2009, it was unleashed unto the world at large, and in keeping with my usual pace, I'm getting around to it about a year later.

Arabian Wood is very much in keeping with the others in the Private Blend collection: it's rough and loud, and quite different from the smoother, more polished (albeit also sometimes loud) fragrances in the "regular" Tom Ford Beauty collection — Tom Ford Black Orchid, Tom Ford For Men, White Patchouli and Grey Vetiver. The opening is heavy on the galbanum and lavender (other notes: Bulgarian rose, freesia, orange blossom, bergamot, rose de mai, ylang ylang, rose absolute, jasmine, gardenia, honey, orris, patchouli, cedar, oak moss, sandalwood, tonka bean and amber) and is a bit screechy, although if you adore galbanum as much as I do, it's screechy in an enjoyable way.

The dry down is a woody chypre, with the rose dominant among the floral notes. It's dense and slightly powdery, and leans somewhat towards the masculine. It is meant to capture "the mystique of Arabia", but it smells like a classic green chypre as much as anything, and as such, calls up older mainstream designer fragrances rather than exotic locales — in other words, it isn't unusual so much as out-of-time, and while I have often bemoaned the loss of the chypre category, this particular entry doesn't feel like a step forward.

My advice: if you want something that captures the mystique of Arabia, ante up a few (ok, many) more pennies and go for one of the Amouage attars (Homage is gorgeous; I have not tried Tribute), or perhaps better yet, find a good purveyor of traditional Arab attars, and then tell the rest of us all about it.