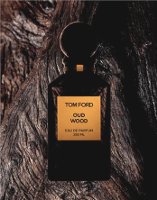 Tom Ford launched the Private Blend Collection in 2007. There were 12 of them (now there are more). They were (and still are, of course) expensive; they were in very limited distribution (that has eased somewhat). I smelled four of them on blotters (a friend had small lab samples) before they were launched, didn't love any of them, and promptly decided, for the sake of my sanity (there were already over 800 fragrance releases that year), to ignore the collection entirely. Kevin apparently decided the same (are we cranky, or what?) but he eventually fell to temptation (see his review of Purple Patchouli), and passed a set of samples on to me, and I've been working my way through them slowly. My favorite so far: Oud Wood.

Tom Ford, of course, has already done oud (aka oudh aka agarwood aka aloeswood), with M7, created under his direction for Yves Saint Laurent and introduced in 2002. You might expect Oud Wood to be the edgy, niche house version of M7, but that would be hard to pull off seeing as how M7 was already pretty darned edgy — if you'd never heard of it before and gave it a sniff, you'd be forgiven for guessing that it came from some obscure niche house instead of Yves Saint Laurent.

Oud Wood, then, takes off in another direction: it might be the mainstream (i.e., toned down) version of M7. That's not to say it's necessary easy to wear, it's just easier than M7, and while it hardly seems like something you'd expect to smell at Macy's, my guess is that it would do better there than M7 did. It's a dark-ish, earthy wood scent, as was M7, and the latter's bitter, almost medicinal undertone is still there (the notes for Oud Wood: rosewood, cardamom, Chinese pepper, oud, sandalwood, vetiver, tonka bean, vanilla and amber). It's lighter in Oud Wood though, and it doesn't last as long; overall, Oud Wood is a quieter fragrance, with the oud itself softened by the vanilla and other wood notes. It does have a nice bite to it, but it isn't nearly as heavily spiced as M7. If you almost liked M7 but found it a bit much, Oud Wood might be perfect. By the same token, if you've become accustomed to the so-thick-you-could-cut-it-with-a-knife style of oud from houses like Montale, you might find that Oud Wood doesn't scream OUDH! quite loudly enough to suit you.

To my nose, it's easily the most masculine of the Private Blends, or at least, of those I've smelled — there are still a few I haven't tried. Whether a woman could wear it, of course, depends on the woman. A reviewer at Basenotes shouts that "THIS IS A MENS FRAGRANCE", so perhaps you should consider yourself forewarned. If you want to fem it up, I will say that it layers quite nicely — nicely enough, in fact, that for about 10 crazy seconds I considered whether I might want bottles of each — with the newer Private Blend Champaca Absolute, probably the most feminine of the Private Blends, and a scent I found too predictably pretty and well-behaved to want to wear on its own.