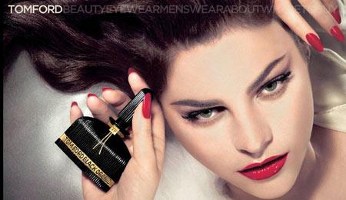 Black Orchid starts right off with a bang — it is a statement fragrance, make no mistake about it. There is citrus, there is lots of sugar, there are heady floral notes, there is jammy fruit. Tempering all of that is a strong undertone of something earthy and dark (the black truffle accord, presumably) and vaguely off-kilter, in a good way.

As it dries down, the earthy-dark stuff fades, the vanilla steps up and the florals turn creamy and smooth. It manages to simultaneously remind me of ice cream (it is sweet and creamy and rich) without being exactly foody (there are way too many heady floral notes here to think about eating). Later still, the creamy vanilla part calms a bit, the woods warm up and some of the earthiness shines through again.

Black Orchid immediately called to mind Viktor & Rolf's Flowerbomb, but not because they smell the same; they share little other than a persistent sweetness. But when Flowerbomb was released last year, it struck me as a surprisingly conventional fragrance from two designers who were known for their unconventional approach to fashion. One year and 400 insipid fragrances later, it doesn't smell quite so conventional to me. It is still far sweeter than I like personally, and I still wouldn't go so far as to call it groundbreaking or wildly risky, but it has way more personality than I initially gave it credit for.

My feelings about Black Orchid are similar. If you were looking for Tom Ford to go way out on a limb, you may end up disappointed: this isn't M7. Like Flowerbomb, Black Orchid is sweeter than I like personally, and I wish the fun stuff in the top notes had some counterpart in the base — a little bit of something off-kilter at the end would have been a nice touch. But it is very well done, has personality to spare, and evokes a kind of grownup glamour that is very appealing after this year's onslaught of lackluster fruity florals geared towards the under-20 set. If there was a more impressive mainstream release this year, I can't think of what it was.

The packaging is just fabulous, and even better in person than in pictures: a retro-glam fluted black glass bottle with an engraved metal plate, very femme fatale, and sure to push you over the edge if you're waffling over whether to buy or not. The bottle for the Parfum is even better: a limited edition (signed and numbered, 5000 bottles) by Lalique, but for that you'll have to save your pennies. 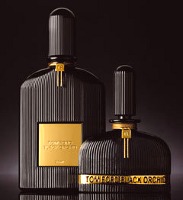 Black Orchid is available at Neiman Marcus. If you don't love it, no worries, Tom Ford has more plans for 2007: Tom Ford Private Blend (a collection of 12 unisex mix 'n match fragrances for "fragrance connoisseurs", rumored to have connoisseur-worthy price tags) and a men's fragrance, and then a color cosmetics line to debut in the fall. A second women's fragrance will follow in 2008.