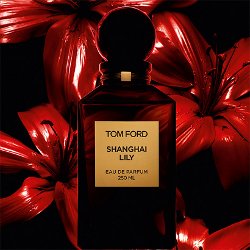 I fell for it so hard that on any given day if I don’t have other perfume wearing plans it ends up on my skin.

I honestly cannot think of anything that smells like it and it definitely joins one or two other launches as being the most exciting perfume released this year...

Not just a bit of love for this one, but a big burning love.

That's Bois de Jasmin, The Candy Perfume Boy and Perfume Posse, respectively, talking about Shanghai Lily, one of the four fragrances in the Atelier d'Orient collection from Tom Ford (the other three are Plum Japonais, Fleur de Chine and Rive d’Ambre). They're all in the Private Blend range, and as I've written before about my general lack of affinity for Tom Ford Private Blend, I won't belabor the point other than to say that the two quartets released just before Atelier d'Orient, Private Blend White Musk and Private Blend Jardin Noir, did nothing to shake my suspicion that the whole line is overrated and overpriced. Still, when Atelier d'Orient came out last year, I dutifully smelled them all on paper blotters at Neiman Marcus. I did like Shanghai Lily the best of the four, but I didn't like it well enough to chase after a sample, so I went on about my merry way and forgot all about it.

Then, of course, I started seeing glowing reviews here and there, and wondered if I'd been too hasty. But I didn't wonder all that hard — I'm prone to inertia anyway, and hey, it's not like there's a shortage of perfumes to smell these days, right? Soon enough I forgot all about it again. Then it came up a few times in the comments here recently, again with glowing recommendations, and I figured it was time to give it another shot.

Shanghai Lily is a floriental; Tom Ford's people tell us that it "transports the senses into a world of rare and opulent ingredients from the historic silk road", and, extra bonus, brings on a "hazy reverie of glamour and temptation" — almost sounds worth the $250 for the small size, right? And it is lovely, particularly in the opening, which is a perfect-for-winter blend of juicy citrus and warm spices with a substantial dose of clove (other notes: bitter orange, black and pink pepper, jasmine, rose, vetiver, tuberose, cashmeran, guaic wood, castoreum, amber, benzoin, vanilla and frankincense). The first twenty minutes or so live up to the hazy-reverie billing, as it warms on skin and the floral notes come into focus, first rose and jasmine, then something closer to lily, but a quiet sort of lily, nothing like so sheer as Cartier Baiser Volé, but nothing so single-minded as Serge Lutens Un Lys either. The florals are draped over a creamy wood base, just sweet and vanillic enough, but not so much that it becomes cloying.

Too soon, though, the reverie fades, along with the historic silk road and all the rest, and I'm back in a bitterly cold January. Shanghai Lily has reasonable sillage and the lasting power is more than adequate, mind you, but the later stages feel a bit flat. The clove lingers far into the dry down, but the florals fade far too quickly; what's left is basically a rather mild spiced wood that makes me think I'd be happier in Donna Karan Black Cashmere. If I could find my Donna Karan Gold, I might try layering it with Black Cashmere to see if that would produce a lily with more oomph.

Verdict: Shanghai Lily is well done, and I will readily admit that I'd like it far better if it cost far less. It's considerably more compelling on skin than on paper, and that isn't always the way it works out. But it isn't compelling enough after the first hour to make my buy list. I won't go quite so far as Persolaise's "unremarkable, if totally competent" (ah, see, I'm not the only one who doesn't adore it!) but still, I'm not enthralled.

For another take on not loving a perfume everyone else thinks is perfect, see Angie's review of Amouage Fate Woman, and of course, do comment on any perfumes that everyone else loves but you!