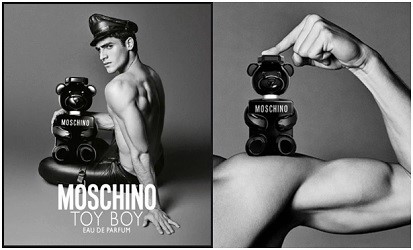 "What perfume are you wearing?" Unless you look something like model Jhona Burjack, you may pause before answering: "Toy Boy." I'd probably say: "Oh, I don't know...I just grabbed one of my 200 bottles of cologne. I wasn't paying attention!"

I'll note here I realize 'toy boy' may conjure other types (for other tastes) than Burjack in leather gear. According to dictionary.com, a toy boy is: a young man noted for his good looks and sexual prowess, especially one who maintains relationships with older, more powerful persons.

Anyhow, I was attracted to Toy Boy because of the the bear bottle, not the pulchritude!

Moschino perfumes have (mostly) been hard to find in the U.S. I was curious about perfumes released when Franco Moschino was in charge. Using Basenotes as a reference, it looks like Moschino (1987, for women) and Moschino Pour Homme (1990) were the only perfumes issued during Moschino's lifetime (he died at age 44 in 1994). That leaves 23 perfumes he never smelled that bear his name; this is my first experience with the fragrance line. 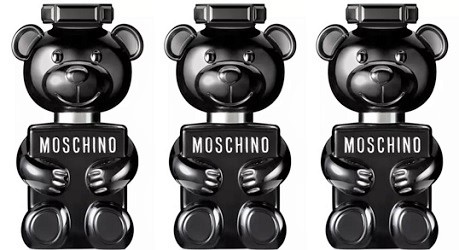 Toy Boy* starts with velvety (and fast-disappearing) bergamot and a soft and unusual (vaguely milky) accord of pear skins and elemi. A rather stark scent appears in mid-development; like the rest of the perfume so far, it's muted but smells of linseed oil. At this point, our Toy Boy is pampered and baby-like in body scent — this boy bathes frequently.

Then? ROSE! Toy Boy's creamy "cosmetic" rose comes on strong; it floats off the skin and creates a rosy cloud around me. Next, mild musk and pepper join the rose to create something that smells more edible/savory than lipstick-floral. Toy Boy is a strange one...I almost like it but the hand/brand that made it was stingy (the budget guys and gals were miserly). I was thinking: if Frédéric Malle had made this, it could have been great.