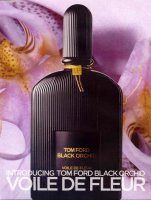 Voile de Fleur is the new Eau de Toilette version of last year's Black Orchid from Tom Ford, who is making up for lost time, apparently, by launching a grand total of 15 (!) new fragrances this year. Voile de Fleur is advertised as a lighter take on Black Orchid, with added white floral notes and "a warm effervescent modernity".

I really liked Black Orchid — not for myself, exactly, as it isn't my style, but I thought it was terrifically well-done, and its sexy, bombshell quality stood out in last year's sea of insipid releases. A quick check of the reviews at MakeupAlley, however, reveals that not everyone agrees with me. Black Orchid has a dismal "would buy this product again" rate of 38%. Ouch! Further investigation, however, reveals lots of 5 lippie ratings (the highest) and lots of 1 lippie ratings (the lowest, as MakeupAlley doesn't have the option of awarding a 0). This is the classic picture of a love-it-or-hate-it fragrance.

So what of Voile de Fleur? Well, the heightened emphasis on the white floral notes is evident from the start. The dark, earthy, black truffle undertones of the original Black Orchid are considerably toned down here, as is the sweet jammy fruit. Instead, we have a sparkling burst of flowers tempered by a bit of citrus. The floral notes are well-blended and more clean than not, and while diffusive, are more airy than heady. I believe Voile de Fleur is classified as a floriental, but it feels like a straight-on floral, and the woody base is comparatively pale, with nothing like the oriental warmth (or massive creamy sweetness) of Black Orchid.

It isn't a dry scent, mind you, or a light one. But think sparkle instead of full-fat Häagen Dazs, and prettily romantic instead of bombshell sexy, and you'll get the picture. It isn't as distinctive as Black Orchid, prettily romantic white florals not being so very hard to come by, and anyone looking specifically for a daytime, office-friendly version of Black Orchid may well be disappointed. They are different enough that you might easily like one but not the other. Of the two, Voile de Fleur is probably easier to wear, and I would guess it will find a wider audience than the original, assuming those who disliked Black Orchid are willing to give it a try.