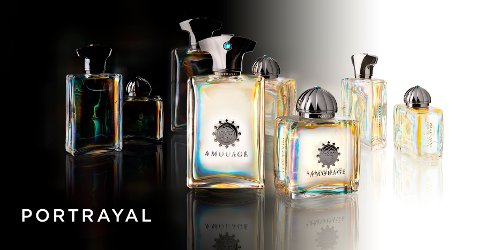 I have to confess that I haven't been keeping up with Amouage very well lately. My interest in Luxury-with-a-capital-L fragrance houses, never too intense in the first place, has dwindled over recent years; meanwhile, Amouage's pace of new releases has been fast and furious. The fragrance duo of Portrayal Woman and Portrayal Man, in their matching iridescent white bottles, was launched back in April and I've just had a chance to try a sample.

Portrayal Woman, developed for Amouage by perfumer Annick Menardo, is "an olfactive portrayal of the 1920s cultural liberation" with a "playful refinement" and notes of jasmine, tuberose, "Craven A tobacco accord," elemi and vanilla. I don't know whether I understand the 1920s reference; I don't associate big white florals with that era as much as I do with the 1940s (Fracas, Billie Holiday with gardenias in her hair, etc.). In any case, Portrayal is a classical white floral, smooth and creamy and conventionally feminine. It evokes tuberose more than jasmine, to my nose. I rarely wear tuberose-heavy fragrances, since they just don't feel like "me," although I do like sniffing the actual flowers whenever I have a chance. Still, Portrayal is a pretty one, with just enough vanilla (and just enough lack of strong indoles) to keep it feeling contemporary and wearable.

I wish Portrayal would show a more rebellious side, since it claims to embrace the rule-breaking, bohemian spirit of the Roaring Twenties. All I'm getting is a gently aromatic edge of incense and some wisps of tobacco; nothing shocking. In case you were wondering, by the way, "Craven A tobacco" seems to be a reference to Craven "A," a cigarette brand established by the Carreras Tobacco Company in 1921 and named for the third Earl of Craven (a friend and customer of Carreras's owners). Too bad it wasn't named for some audacious young heiress; then it might make more sense for Amouage Woman...? I suppose the point here is that women were smoking more in the 1920s. However, this tobacco accord, whatever it's named, isn't intense enough to make me think of hot jazz, short hemlines, or any other daring tastes and trends of that decade.

Since Portrayal's launch last spring, Amouage has undergone some major reorganization: Chief Executive Officer David Crickmore and Creative Director Christopher Chong both have resigned. Meanwhile, three more new fragrances have been released. (See what I mean about the fast pacing?) I'm curious to see what will happen next. Who will steer the brand? What will the inspiration be for future Amouage launches? Will I ever be able to keep up with them again? We shall see.

Amouage Portrayal Woman is available as 50 ml ($255 ) and 100 ml ($335) Eau de Parfum. For purchasing information, see the listing for Amouage under Perfume Houses.