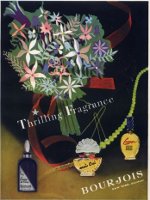 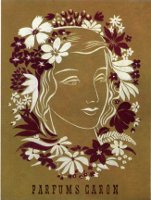 [Ed. note: 5 years ago, I wrote an article called 100 Fragrances Every Perfumista Should Try. Every year since, it has turned out to be the most-read article on Now Smell This. I was less than satisfied with it when I published it, and 5 years on, it's really showing its age. This week, Angie and Kevin are adding to the fun with lists of vintage and men's fragrances respectively, and I'll be making some updates to my original article. Jessica will join in with a list of rose fragrances next month. Robin]

How to choose 25 vintage fragrances of the thousands of discontinued and reformulated perfumes out there? In compiling this list, I tried to choose fragrances that are important yet have changed substantially over time, or that have been discontinued yet left a significant mark in perfume or cultural history.

For instance, Guerlain Shalimar, while a landmark fragrance, is all right in its current incarnation, so I don’t mention it. Chanel No. 5 and Patou Joy have been monkeyed with, but they’re still recognizable (although real fans may want to hunt down the older versions). On the other hand, Lanvin Arpège is a whole new story these days. I aimed for perfumes that will add to your olfactory knowledge, even if you don’t love them. I also included a few that are just plain wacky and, I think, deserve a sniff.

So, let’s go. In alphabetical order:

A tough Germaine Cellier sharp green-violet-leather that is still in production, yet has lost its teeth over the years. In molding Jolie Madame to the times, her fusty goodness has been smoothed away.

Dirty, mossy, sharp gorgeousness, also compliments of the innovative perfumer Germaine Cellier. Sadly, vintage Vent Vert is a volatile beauty and rarely survived the years well. If you find an old bottle, be sure to give it a few minutes after spraying to burn off any damaged top notes.

This one is worth smelling because it’s a cultural milestone (and easy to find). After World War II, when even middle class Americans could pretend some knowledge of Europe thanks to the returning GIs, Evening in Paris symbolized all the glamour of France. Yet it’s still as easy to appreciate as an Avon talcum powder. This one underwent a major reformulation in 1991.

Tabac Blond made its reputation as a tough libertine embraced by women who like a little black leather with their gorgeousness. It was jolie laide in a bottle. These days it’s turned into a friendly rose with a splash of birch tar. If you can find vintage Tabac Blond, grab it.

This is a murky, animalic fragrance of a type almost never made these days, but worth smelling to unlock the scent of many a 1940s bombshell’s boudoir. To those new to perfume, it might smell like a combination of motor oil, narcissus, and powder-infused muck, but old-timers recognize it as the imprint of a whole era of sex appeal. Seek out the extrait.

When perfumer Guy Robert created Dioressence, he built the acme of clean and sexy by infusing ambergris with a sophisticated aldehydic take on Miss Dior (see below). Over the years, Dioressence has been dumbed down to a mere rosy sketch of its old self. Try for the houndstooth boxes if you can.

The ne plus ultra of elegant leather fragrances, now a fine but different fragrance. Leather lovers, grab this one if you can find it, and avoid versions in the smooth oval bottle.

I’m not going to lie — Miss Dior is a tough fragrance to love. But once you do love her, you want her in her full freaky, dirty sage, animalic, mossy glory. Over the years, Miss Dior has been spanked about until she is teen-friendly. I cry to think of it. Complicating matters, just this year Christian Dior renamed its old Miss Dior Chérie “Miss Dior” (after reformulation, of course) and labeled the real Miss Dior “Miss Dior Original.” If you don’t recoil a bit on smelling vintage Miss Dior, it may not be a solid version of the original. 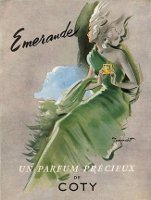 This was the first chypre, and for that reason alone it’s worth smelling. Frankly, the version I smelled didn’t blow me away. But Coty Chypre was manufactured for a long stretch and adjusted (and cheapened) frequently over those years, I’m sure.

The old Emeraude was a real beauty, comparable to Guerlain Shalimar. Emeraude has legions of fans. You might well end up one. Emeraude has the advantage of being relatively easy to find.

Rumored to be the inspiration for Guerlain L’Heure Bleue. The old stuff is gorgeous, herbal, and romantic. After about 1980, its beauty underwent the knife and came out more Stepford fragrance than original beauty.

Come on. Whose mom or naughty aunt didn’t wear this? Simply to smell the Carter-era zeitgeist, it’s good to know Tigress. And the bottle is hard to beat.

The original, in the cocktail shaker-like bottle, was gorgeous and fetid at the same time. Immensely masculine, and irresistible. The current version is tamer.

Thanks to Audrey Hepburn, L’Interdit is destined to be a classic. If you can’t find the original of this aldehydic floral fruity classic (not the very different, strawberry-heavy version in the squat bottle that debuted in 2002), try the 2009 Les Mythiques remake in the tall, plain rectangular bottle.

I add this for the Mitsouko enthusiasts who track Mitsouko’s evolution over the years and lament its disfiguration since the IFRA limits on oakmoss. I’m more of a Rochas Femme girl, so I haven’t really kept up to the minute on Mitsouko’s evolution, but I’ve found that vintage Eau de Cologne is a good substitute for Parfum if you can’t score any older than five or so years old.

I can’t say Colony is a classic, but as a pineapple chypre it’s so delightful and goofy that if you get the chance to smell it don’t pass it up.

This is another personal favorite, a gorgeous lavender-amber perfume that disappeared long ago. Lavender too often is relegated to men’s colognes. Here, it’s a melancholy, and sadly forgotten, poem on its own.

Arpège has had a few, distinct lives. In its first incarnation, it was a glamorous aldehydic floral. It was reformulated in 1993 as a distinctly different fragrance, still beautiful, but replete with full-bodied woods and earthy base notes that overwhelm the original’s delicacy. The original version didn’t always age well, but it was worn by so many PTA moms that it’s worth knowing.

Whether you like it or not, you’ve got to smell it. Similar to Caron Narcisse Noir, My Sin is a stamp of its time, like mink stoles, Old Fashioneds, and cigars. It’s a mix of animal essences and spring-like flowers that ends up smelling like a fetid dressing table, yet somehow much more desirable.

Perfumer Edmond Roudnitska reportedly called this a perfect leather fragrance. Do you really need to know more? It’s wickedly difficult to find, but I list it to give you (and me) something to dream of.

Lovers of Indiscret note that Yves Saint Laurent Opium didn’t come out of nowhere. Indiscret is a spicy, narcotic floral that appeals to modern noses. A version of Indiscret is still made but is barely recognizeable.

A piece of perfume history, both for how it was made and for its fragrance. Crêpe de Chine was discontinued in the early 1960s1 and is tough to find, but worth a sniff if you like dreamy retro woods.

Like Arpège, Femme has had two distinct phases. The first phase, truer to Edmond Roudnitska’s original, is a sexy, animalic lemony-peachy chypre. Over its 40-year life, Femme was, of course, reformulated more than once, but still played to its original theme. In 1989, Femme was reformulated into more than simply an “adjustment” to its original perfume, but into a bossy perfume with an in-your-face cumin note. I love both fragrances, but perfume lovers will want to know the original Femme because it’s referred to so often.

For years, Shocking was a popular animalic rose-honey scent. Its popularity waned, and in the 1990s it underwent a major reformulation. The new version never really caught on. The vintage version is a door into another age.

Weil first made furs, then ventured into fragrances to complement them. Zibeline is a spice-laden scent that has captured many a perfumista’s attention, and despite originating in the years of Prohibition, Zibeline is easy for the modern perfume wearer to love.

Je Reviens has been made over more often than the little black dress. Each time, though, it seems to simplify to the point that it’s lost its mystery altogether, even in the (now discontinued) couture version. Early versions of Je Reviens are a queer mixture of modern and old fashioned in a green-floral scent that embodies the vibe of science fiction films from the 1930s with flying saucers that look suspiciously like upturned pie tins zooming over flower-sprigged meadows.

I'd intended to keep the list at 25, but couldn't help bumping it up one. Really, I could easily add another 25. What would you put on the list?

See also: How to find perfume at thrift stores, How to Buy Vintage Perfume and On reformulations, or why your favorite perfume doesn’t smell like it used to.

1. Update: When, exactly, Crêpe de Chine was discontinued is up for debate. I’ve heard anecdotal reports of people buying it as late as the early 1970s, but I can’t find any authoritative date that it stopped being produced.