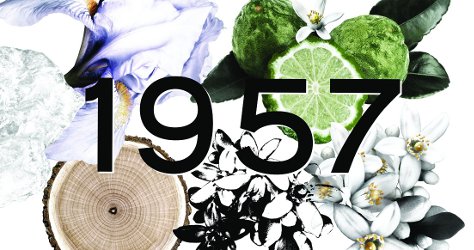 Olivier Polge composed 1957, and its notes include white musk, bergamot, iris, neroli, cedar, powdery accents and honey. In short, 1957 is all about layers of cloud-like musk with a vaguely powdery floral heart and peppery top.

First, let’s talk musk. Some of you probably cringed when you read “white musk.” I understand. 1957’s musk in no way references the Body Shop or Coty. Nor does it smell like laundry detergent. 1957 is a lesson in musk as texture. Its musk builds cumulus fluff barely touched with face-powder iris and tingly neroli, so that you almost feel the fragrance more than smell it.

Delineating the fragrance’s boundary is an assertive helping of pink pepper and bergamot that melts away after an hour, to be replaced by a quieter dose of cedar. Mostly, though, in 1957 I smell a kitten’s belly of layered musk. The fragrance stays close and wears lightly, and by noon I was wanting to spray on more.

1957's elegance and restraint brands it as a Chanel, but it's one of the subtler ones. 1957 is a true skin scent. It’s not a fragrance to wear if you want to make a statement. Instead, it’s the nude lipstick of perfume. It’s something that enhances rather than “styles” you in the name of beauty. 1957 softens your mood and adds a downy halo to whomever you are — charismatic CEO, goth biologist, retro pastry chef or buttoned-up poodle breeder.

This characteristic is exactly what might make 1957 a lousy bet for some people. Given its cost, some perfume lovers will insist on a fragrance with its own voice. They’ll want something with flash. Anyone remember the episode of I Love Lucy where Lucy agrees to buy a couture dress to get into a fashion show? She purchases a plain number meant for daily wear, with the idea that it will be less expensive than the evening dress she truly covets. It turns out they cost the same. The connoisseur appreciates the craft invested in the day suit, even though the evening gown has more splash and sparkle. 1957 might be the day suit. You notice the wearer rather than the garment she wears.

Now let’s return to Paris. I see comparisons to 1957 here, too, in the city’s neutral yet comforting overcast sky and creamy limestone buildings. The city is a background for the theater of life. In the hotel across the street, a couple is having a pillow fight and laughing. In another window, a woman eats something from a tiny bowl in front of a dozen votive candles. A man waters his balcony gardens bursting with geraniums and herbs. Meanwhile, rain splatters over the slate roofs, and the full moon stains pearl light on the clouds.