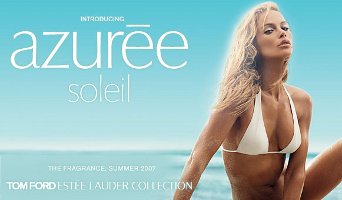 Azuree Soleil Eau Fraiche Skinscent is part of this year's Tom Ford Estee Lauder Collection, and will launch as a limited edition this coming April. Other than the inspiration ("the Mediterranean near Mrs. Estée Lauder's vacation home in Cap d'Antibes, off the coast of France"), it has nothing in common with the original 1969 Azuree fragrance from Estee Lauder. The notes include tiare (gardenia), orange blossom, jasmine, magnolia petals, myrrh, bergamot, mandarin, amber, sandalwood, vetiver, caramel and coconut cream.

I have said before that I'm not a big fan of tropical-beachy or suntan oil scents, and so when the Azuree Soleil Body Oil was released last year, I didn't rush to try it. By the time I got around to giving it a sniff, all the stores were sold out. Even then, the little tiny sample I managed to snag didn't make much of an impression on me. Still, everyone else raved about it so I was curious about the new Eau Fraiche Skinscent.

Well, I'm a convert. It is tropical-beachy, but the lovely thing about the Azuree Soleil is that it is so much nicer than your typical, overly sweet coconut-laden suntan oil; in fact, if Estee Lauder would release this in a suntan oil, I buy it in a flash. Yes, there is milky coconut, and tropical flowers, and even a hint of caramel, but the tropical accents are not overdone: it is very subtle, with just the right amount of warmth and spice, and the woods keep the sweeter elements grounded. In the early stages, it is as much a summery woods scent as anything else, with, as promised, a "warm sand" quality; after an hour or so, the woods start a slow fade, leaving behind a very soft, very pretty gardenia-based floral.

I've seen a number of complaints from those who wish that Estee Lauder had released Azuree Soleil in a stronger concentration, but I think I like it just as it is. The lasting power is excellent for an Eau Fraiche (4-5 sprays on one arm lasted for as many hours, perhaps more). It is a mood as much as a fragrance, and will be just the right sort of thing for very hot days when you don't want to wear anything heavy, or for nasty cold days when you'd like to pretend you're somewhere other than stuck at home, watching the sleet fall outside your window.

It is best, perhaps, not to think of it as a perfume at all but as a body product — you'll want to use it as a body spray, not dab it on pulse points, and it is light enough that you could just about bathe in it without creating more sillage than those around you could stand.

Estee Lauder Azuree Soleil Eau Fraiche Skinscent will be in 50, 100 and 250 ml, or you can try the Azuree Soleil in Body Lotion or Body Oil. If last year is any indication, you might want to keep an eye on the Estee Lauder website and buy sooner rather than later.