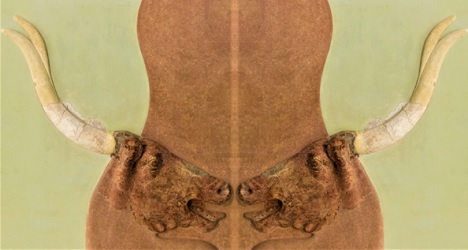 In France, south of Arles, lies Camargue — a UNESCO-designated biosphere. Camargue is known for many things: its ancient-breed white horses, flamingos (and many other migrating birds), salt production, Camargue red wild rice (referenced in today's perfume Le Chant de Camargue*) and the Course Camarguaise — Camargue's brand of bloodless bull-fighting (or "race"). Though the stately black bulls of Camargue are individually known and are not killed in this "sport," I can't imagine it's much fun to be chased, teased, enraged and prodded under a hot sun in front of thousands of screaming humans.

Bulls — one of the world's unluckiest animals.

Through his olfactory itinerary, perfumer Alberto Morillas embarks on a journey of discovery, revealing the Camargue in all its glory – Aigues-Mortes, Arles and Saintes-Maries-de-la-Mer.

Does Le Chant de Camargue conjure the aromas of Camargue's marshy plain, its famous rice and salt, its iconic animals? Uh. No. Le Chant de Camargue could smell like the region, but only after a Guerlain perfume tanker ran aground and spilled raw white musk into the biosphere. Sea Captain Thierry Wasser...watch where you're going! Another Guerlain alumni and adorer of white musks came to mind as I smelled Le Chant de Camargue: Sylvaine Delacourte would welcome it with open arms into her (white) Musk Collection of scents. I know I'm always picking on Guerlain when it comes to overuse of white musk; these days almost every perfume house has its white musk offerings.

Le Chant de Camargue starts off sickeningly sweet with candied bergamot and "milk" (possessing an eggnog thickness). A hazy sandalwood-white musk aroma arrives next and is joined for a second or two by "salty" and "dry rice" scents (providing but a moment of earthiness to stave off a sugar coma in the wearer). Liquid milk turns to powdered milk in Le Chant de Camargue's base, each phase as cloying and overwhelming as the other. The perfume veers between old-fashioned make-up aromas (on steroids, suffocating) and contemporary lacteous-gourmand musks. Le Chant de Camargue is mostly linear and unrelenting...a white musk lover's dream bottled. Or, if you're me, a white musk hater's incubus.