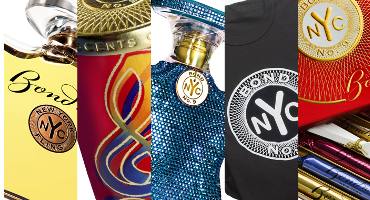 Bond no. 9 was established in New York in 2003 by Laurice Rahme, who had previously worked for Annick Goutal and Creed.

The line currently includes some 50+ fragrances. The early scents were named after (and inspired by) New York City neighborhoods; later, the brand extended its focus to include other themes.

Recent releases from Bond no. 9

Bond no. 9 products can be purchased at Saks or Nordstrom department stores, or at the Bond no. 9 boutiques in New York City (see shopping report for the flagship store). Online stores include Hampton Court.

In Germany, try First in Fragrance; in the UK, Harvey Nichols or Harrods.

See all articles at Now Smell This tagged Bond no. 9.

Read an interview with Laurice Rahme. See also: How I Made It: Laurice Rahme, owner-founder of Bond No 9 at the UK Times Online.