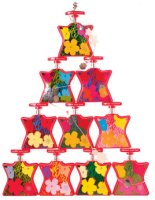 Bond no. 9's Andy Warhol Union Square, due for launch in March, will be the second of a projected series of twelve fragrances under an agreement with The Andy Warhol Foundation for the Visual Arts (the first was Andy Warhol Silver Factory). The packaging features...

...10 different bottles, each with a slightly different version of the flower print based on original silk screens of the "Flowers" print. For avid collectors and hard-core Warhol fanatics, the complete portfolio of 10 100-ml. bottles will be offered in a box for $1,500.

Bond no. 9 Andy Warhol Union Square will be available in 50 and 100 ml, concentration unknown. (via Women's Wear Daily)

Note: Union Square was the location of Andy Warhol's studio, known as The Factory, after it moved from its original location on 47th Street in 1968.