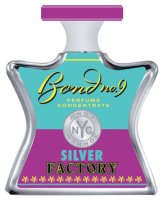 Bond no. 9's Andy Warhol Silver Factory is the first in a projected series of unisex fragrances created under an agreement with The Andy Warhol Foundation for the Visual Arts. The (perfect! I want one!) bottle design for Silver Factory was inspired by Warhol's 1965 series of Campbell Soup Can silkscreens, and the scent was named for Warhol's Manhattan studio, The Silver Factory, where the walls were decorated with aluminum foil and spray paint. Andy Warhol was said to be fond of perfume — he was reportedly buried with a bottle of Estee Lauder Beautiful — and there was until fairly recently an Andy Warhol branded line of fragrances (see a print ad here) under Cofinluxe.

I never smelled any of the earlier Andy Warhol scents (please comment if you did!) but perfumer Aurelien Guichard has done a great job of creating something that might reasonably evoke the experimental pop culture atmosphere of the late 1960s while still smelling very much like a modern niche perfume. Silver Factory opens on citrus and lavender, lively, but still more soft than sharp (the complete notes: bergamot, grapefruit, lavender, violet, incense, jasmine, iris, amber, wood resin and cedar). The incense and woods are present from the start, and as advertised, a metallic note runs through the proceedings. There is something ever so slightly off-kilter (in a good way) about the early stages, maybe a touch of birch tar or leather? Patty at Perfume Posse calls it "metallic rubber".

The florals in the heart are subtle; the cedar in the dry down, less so. After a couple hours, the iris seems to reassert itself, and it takes on a velvety finish with earthy undertones. It is more dry than sweet, and more dusky than dark. The softness of the opening sets the tone for what follows — Bond no. 9 calls it "smooth" and that is as good a description as any. There is nothing high-pitched or loud about Silver Factory, nor does it have the brooding, high-church feel of some incense-heavy fragrances.

If Estee Lauder's Beautiful was representative of Andy Warhol's preferences in perfume, I don't think Silver Factory would be at all to his taste. Happily, it is very much to mine. It's easily the most interesting scent from Bond no. 9 since 2005's Chinatown (also Aurelien Guichard).

Bond no. 9 Andy Warhol Silver Factory will debut in December; 100 ml perfume concentrate (28% concentration) for $230. A second fragrance in the series is due to launch next spring.