Brooklyn, which launches next month, will be Bond no. 9's 33rd fragrance. As is the case with many of the brand's recent offerings, the packaging is half the fun; some people objected to the graffiti-covered bottle as a representation of Brooklyn, but I'm in love. Really, Bond ought to start letting their customers choose the bottle they'd like with their favorite fragrance, don't you think? And as long as we're dreaming, have all the empty bottles available in, say, 15 ml?

Brooklyn is a unisex fragrance from perfumer Laurent LeGuernec, and is pegged as a woody oriental. Overall, it's a much fresher scent than you might expect from that designation (the notes: grapefruit, cardamom, cypress wood, geranium, juniper berry, cedar, leather and guaiacwood). The opening is crisp, bright grapefruit, and a burst of cypress joins in shortly, along with a fair dash of spice. It's slightly green, and the juniper berry lends a sort of gin-cocktail vibe in the early stages. While the leather and guaiac wood are not as heavy or dark as they sometimes can be — Brooklyn feels very much like a spring/summer fragrance to me — it does, as advertised, "tilt towards the masculine", more so the longer it's on skin; still, a woman could easily wear it.

It's an easy-going, casual scent, not so daring as say, Andy Warhol Silver Factory (still my favorite of the line so far), and perhaps not the artsy sort of thing I expected they'd do for Brooklyn, but pleasant and nicely done. I predict it will do very well.

Bond no. 9 Brooklyn will be available in 50 and 100 ml Eau de Parfum; for buying information, see the listing for Bond no. 9 under Perfume Houses. 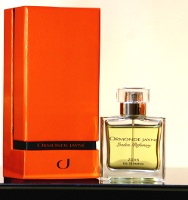 Zizan is the latest from Ormonde Jayne. It's being marketed as a men's fragrance, but is arguably slightly less masculine than Brooklyn, so take your cues accordingly.

As it went with Brooklyn, Zizan is not the most daring scent in the Ormonde Jayne line, nor even the most daring offering for men (that honor would go to the lovely Ormonde Man). It's something of a modern vetiver scent (the notes: lime, lemon, bergamot, clary sage, pink pepper, juniper berry, bay, violet, jasmine, vetiver, cedar, musk and amber), with lots of sparkling, peppery citrus in the opening. The early stages are more juicy than crisp, and the citrus lingers long into the dry down. The juniper here doesn't really call to mind a cocktail, but like Brooklyn, Zizan has a fresh, summer-y feel. The vetiver is noticeable without being deep or even especially earthy; the longer Zizan is on skin, the more it wears like a variation on Ormonde Jayne's Isfarkand.

Zizan is an enjoyable fragrance, very wearable, nicely done — but not, perhaps, as unusual as I'd hoped given that Isfarkand seemed to me to already fill that slot in the Ormonde Jayne line. Personally I prefer Isfarkand by a hair, but that is a matter of personal taste.