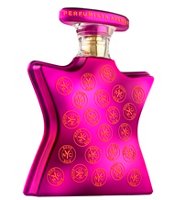 Bond no. 9 has launched Perfumista Avenue, a new fragrance for women that celebrates the brand's 10th anniversary:

...So as an anniversary gift to ourselves, we designed an eau de parfum for this fantasy street that was filled to the brim with perfume wearers. We envisioned it not in any particular part of town—instead, it partakes of the best of all of New York: the elegance of the Upper East Side, the culturati atmosphere of the Upper West, the high-voltage energy of Midtown, the bohemian verve of Downtown and the Manhattan-ized parts of Brooklyn, and the lively dynamism of the outer boroughs. This imaginary thoroughfare, which we named Perfumista Avenue, hovers all around town.

[...] There are many who say that the template for exquisitely beautiful and accomplished women was set in New York. But Perfumista Avenue was made for women everywhere who exhibit a New York state of mind. Super-strong and determined, this is an orientalist, leather-tinged blend that modernizes the breathtakingly fresh, ultra-feminine rose (New York State’s official flower). Here, rose is immediately perceived as a starting point, accompanied by lush and succulent plum. These give way to a series of overtly seductive animal notes: honey and musk, along with musk-like amber, and earthy patchouli. The overall effect is high-grade intoxication.