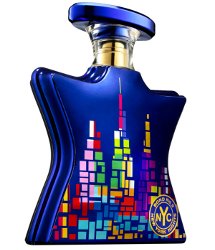 This after-dark skyline was the inspiration for New York Nights, the eau de parfum, which infiltrates the air with similar elation. A broad-spectrum female urban gourmand. it perfectly captures the undulating glow of New York’s after-dark skyline glow. Its topnotes are unabashedly romantic and floral–jasmine, gardenia and carnation. Then come the warm, seductive heart notes– patchouli and sandalwood, enlivened with a clean floral marine accord. And with the lingering base comes the kicker: coffee infused with caramel, racing the heart and punctuating the New York night. So beautifully structured is this scent that minutes later it leaves in its wake an unexpectedly intriguing creamy-floral trail that’s as light as air.

Both sides of the New York Nights bottle display a stylized adaptation of the city after dark. Against a gleaming late-night royal blue background, with a lowering cloud passing by, a multitude of stylized skyscrapers and spires glimmer in boxed-in otherworldly pink, red, green, buttercup yellow, cerulean blue, and gold. Think colorful confetti. Think shimmering New York nightlife. Where else in the world would you want to be?