Created by Firmenich's Natalie Lorson, the Esprit de Gingembre duo is said to evoke Schlesser's love of Asia and capture the idea of timeless freshness through ginger.

Both of the Esprit de Gingembre fragrances will launch in September, and will be available in Eau de Toilette. (quote via cosmeticsint.co.uk, additional information via cosmeticsbusiness, estiloymoda) 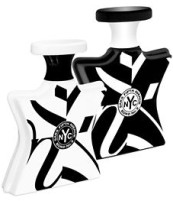 Also coming in September, Bond no. 9 will launch two new exclusive fragrances for Saks Fifth Avenue. Both scents were created by perfumer Michel Almairac, and the bottles are designed around the Saks Fifth Avenue logo.

Saks Fifth Avenue for Her is based on gardenia, and also features notes of jasmine, vetiver and vanilla.

The Bond no. 9 Saks Fifth Avenue fragrances will be available in 50 and 100 ml. (via cosmeticsint.co.uk, fashionweekdaily) 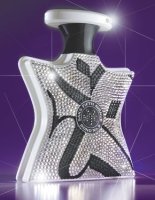 Update: shown at right is the "eye-catching special edition 3.4-oz. bottle of the women's scent encrusted with 350 Swarovski crystals on the front, 350 on the back and 300 on the outer carton for a total of 1,000". The limited edition run will comprise 500 bottles at $550 each. (via Women's Wear Daily)

Update: additional notes for Saks/Her include tuberose; for Saks/Him add chili, black pepper, incense and guiac wood. (via press release from Bond no. 9)