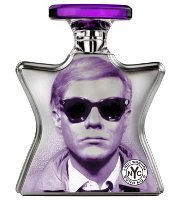 ...the time was right for an eau de parfum that’s an ode to Warhol himself, with an image of the artist himself on the bottle. The picture we chose, repeated on each side, is a photo-booth portrait of a youngish, clean-cut, Mad Man-esque Warhol, circa 1963 - 1964, when he was 35, wearing sunglasses, along with the era’s essential trench coat, white business shirt, and tie. Photomat pictures like this one, whose images are repeated with or without subtle variations from shot to shot, opened up a new creative approach for Warhol, as was soon evidenced in his series and multi-panel portraits—such as his Jackie and flower paintings. What’s more, this bottle design happens to be a contemporary variant of the ancient Janus-faced motif. (In numerous art works, Janus, the god of beginnings and transitions, is depicted as having two faces, one looking ahead, the other looking back.)

The Andy Warhol by Bond No. 9 scent (androgynous, of course) kicks off with fresh and lively Italian bergamot zest and peach juice—which are quickly juxtaposed with red rose, peach juice, and spicy cumin, having their luscious say. The heart of this brew is a Warholian mix of mischief mingled with eros: Honeyed centifolia rose, white patchouli and cistus ambre (a Mediterranean shrub with a woody, smoky, plum-like kick similar to that of amber itself), play off against outspoken jasmine, lemony-spicy frankincense, and riveting oud. Then when we reach the drydown, we’re in full-throttle late ‘60s aphrodisiac territory, with a blend of sultry amber, intense red sandalwood, mulled plum, Madagascar vanilla bean, and—not least—musk.