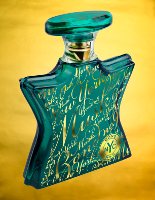 In a virtuoso performance, New York Musk displays its versatility when surrounded by contemporary fruit and spice accents. It opens with lightness and buoyancy: a blend of sparkling grapefruit flower, tart and tangy blackcurrant, and galbanum—a pine-like aromatic gum resin from Persia. Then come the midnotes, reinforcing that theme: Asian osmanthus flower, recalling peaches and apricots, combined with lemony-green lilies—yes, flowers that smell like fruits—while spiking this mix is spicy nutmeg. Musk comes into play in the base notes, as it usually does, surrounded by its lingering cohorts, those willing conspirators in seduction, patchouli, sandalwood, and vetiver.