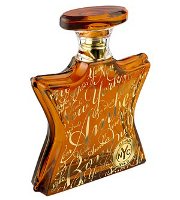 Bond no. 9 has launched New York Amber, the second fragrance in the series that started earlier this year with New York Oud:

At Bond No. 9, we’ve built our reputation on New York-centric scents that capture and are named for the spirit of our great city’s legendary and up-and-coming neighborhoods—from Riverside Drive to Nouveau Bowery to Coney Island. But concurrently, we’ve lately begun designing eaux de parfum that are metro-accented odes to our favorite fragrance notes. Simply put, our mission is to New York-ify these legendary scent notes, composing blends that bring out their metro bona fides. First came New York Oud, a homage to the Eastern-world wood, which we modernized and energized for our fast-paced, multifarious cityscape.

Now comes a shared male-female blend which celebrates a very different aspect of New York: its seductive, sophisticated edge. Introducing New York Amber, whose powerful but quietly sensual key ingredient is a musky, earthy, honey-like tree resin with a haunting liquor-gold color that has also made it an enticing gemstone. Found far away, along the shores of the Baltic Sea, amber nonetheless has all the sought-after New York smarts—being as smooth and flawless as twilight on the Hudson, as cocktails at a skyscraper aerie, or a Gershwin rhapsody in gold. One of the most ancient ingredients in the perfume repertory, amber was so prized by the Greeks that they associated it with the Sun God.