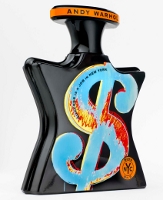 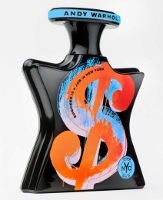 Just like money, the scent is genderless—a warm and spicy gourmand. And just like money, it lures and intoxicates all who give it a sniff. Its spicy-citrussy top- notes—coriander, cardamom, mandarin, bergamot—lead into a throbbing heart of jasmine, tuberose, rose, plum and pimento (of all things) that eventually segues into an oriental base of vanilla, patchouli, and amber.

The bottle features an Andy Warhol dollar sign from 1981: blue on one side of the bottle, orange on the other.

* The title was later used for the book Success Is a Job in New York: The Early Art and Business of Andy Warhol. Bond no. 9 is guessing it's the longest fragrance name ever: can that be right? Do comment if you know of a longer one.

Update: the perfumer for Andy Warhol Success Is a Job in New York was Claude Dir.