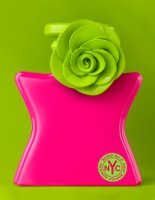 Bond no. 9 will launch Madison Square Park in April:

The park known as Madison Square (named for the president and principal author of the U.S. Constitution) is at the junction where Fifth Avenue and Broadway momentarily converge as they head downtown, only to be separated by the prow of the Flatiron Building on 23rd Street. In the mid-19th century, as the opulent Gilded Age got under way, the surrounding streets grew lush and residential. Lavish Beaux Arts- and Rococo-style grand hotels and retail emporiums arose. This was Theodore Roosevelt and Edith Wharton territory. Herman Melville wrote Billy Budd on East 26th Street. The grid of streets around Madison Square Park became Manhattan’s hotspot. Fast-forward to 2011, and now again, this is the place to be.

In 2004, the park and environs reawakened. That was the year when that ivy-covered gourmet snack bar, Shake Shack, opened amid the park’s greenery, attracting huge crowds. Other restaurants followed, the most recent of them being the Italian mega-food hall Eataly, situated directly opposite the street. And nearby: Nuela (a haute Nuevo Latino cevicheria), and the John Dory Oyster Bar. What’s more, elegant hotels have re-emerged—the ultra-trendy Ace Hotel, the Eventi, the NoMad, the MAve, the Carlton, and the Roger Williams. So once again, it’s a chic locale.

Naturally, we at Bond No. 9 had to give this vivacious neighborhood its own vivacious eau de parfum. So for April 15, we are delighted to introduce Bond No. 9 Madison Square Park, an arresting, super-bright mélange of romantic florals and crisp greens. Starting with springtime topnotes—intoxicating, musk-like grape hyacinth paired with tangy huckleberry and delicately spicy prairie dropseed grass—the scent soon segues into a heart of voluptuous red leaf rose, traveling with its sidekick, Red Hunter tulip. And for its finale, these lush and vibrant florals at last give way to calmer, deeper, darker teakwood and vetiver root.