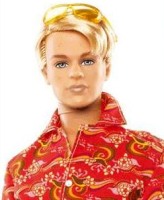 My childhood was spent on land situated between the Atlantic Ocean and the Chesapeake Bay, and I’ve lived in New York City, Los Angeles and Seattle, so water and water activities have always been a part of my life, but since I can’t swim, I have a certain “fear of the water.” When it comes to perfumes, I have a fear of ‘water’ too, the type called “marine fragrances” that are drenched with ozone and aquatic notes. I’ve always wished perfumes could capture the scents of the open sea and the winds blowing over the ocean, but perfumes are better at replicating the oceanic “sideshow” — scents of sand/damp earth, the dry, reedy smells of vegetation growing at the seaside, the mineral scents of shells, the bracing aroma of salty seaweeds, the odors of tarry wooden wharves or outboard motor exhaust fumes.

I usually avoid all fragrances with marine/H2O themes, but armed with a perfume “life preserver” (soft-bristle scrub brush and unscented detergent), I decided to face my fears and sample three Bond no. 9 fragrances that are named after places at, or near, the ocean.

(2005); Rene Morgenthaler, perfumer. Like reviewers and fragrance-blog commenters before me, I immediately recognized the similarities between Creed Silver Mountain Water (1995) and Bond no. 9 Hamptons. The two fragrances (one inspired by high altitudes and the other by sea-level luxury) smell so much alike, I checked the ingredients lists for both scents: Hamptons — lime blossom, bergamot, white jasmine, magnolia, amber and sandalwood; and Silver Mountain Water — citrus, tea, blackcurrant, musk and ambergris. After sampling the fragrances side by side, I’m led to believe: A. someone important at Bond no. 9 loves Silver Mountain Water and wanted a clone of it in the Bond no. 9 collection and/or B. there’s an aroma-chemical that just is (or almost is) “Silver Mountain Water” and “Hamptons.” The aroma-chemical, if it exists, is a little bit fruity, a little bit flowery, very “fresh” and musky (in the clean musk category); the aroma-chemical is almost indestructible — it can last an entire day (24 hours) on skin and weeks on fabric and it is so overpowering it makes other fragrance notes in a perfume formula superfluous. Hamptons and Silver Mountain Water are best smelled from afar, “on the air” …the closer you let your nose wander to scented skin with these perfumes the more jarring the perfumes will smell. All that said, and acknowledging my usual hatred of fresh/ozonic fragrances, I’ve always had a soft spot for Silver Mountain Water.

A friend who is rather new to perfumes (wearing them and buying them) purchased Perfumes: The Guide, on my recommendation mind you, and uses it as her fragrance “bible”. When I mention a cologne to her, the next day she will tell me what Turin-Sanchez had to say about it. (I found this cute at first.) When I said I liked Hamptons, my friend looked in her book, saw that Hamptons got a one-star review (meaning “AWFUL”) and had this written about it: “Anyone who would choose to wear this confused, harsh concoction is someone you would not invite for a weekend at your summer home.” (Silver Mountain Water also gets a one-star review.) After informing me of Hamptons’ rating, and reading its review aloud, my friend looked at me with an expression that implied: “Are you SURE you like Hamptons?” (Luckily for our relationship, my friend does not own a summer home.) And, yes, I’m sure I like Hamptons!

(2006); Michel Almairac, perfumer. Fire Island was supposedly created to mimic the aroma of a famous European suntan lotion, and its scent does remind me of high-quality “skincare products.” Fire Island contains cardamom, neroli, white musk, skin musk, tuberose, and patchouli. Fire Island has a light, yet warm, aroma; its musks are soft and powdery and they blend nicely with its flat-lining tuberose and clean patchouli. Yes, there is an air of artificiality in Fire Island’s ingredients, but for some reason (are the sun and heat affecting me?) Fire Island pleases me. Fire Island reminds me of beautiful beaches, of unintentionally hilarious nude sunbathing incidents that occurred in my high school years (the only time I’ve ever sunbathed in my life). Finally, the ‘idea’ for a Bond No. 9 location-specific fragrance meets its match in execution — Fire Island smells like a toasty summer beach where people are baking themselves and spraying, rubbing, pouring suntan products and moisturizers/oils onto their hair and bodies.

Fire Island has good lasting power and stays close to the body. Fire Island is “genderless” but I’ve been told by two retailers it sells best to men (because of its floral notes, Fire Island is probably more interesting/daring to men; women, with their endless choices of floral fragrances, may find Fire Island unexciting). Many have asked the question: “Why would someone buy a $125/$185 Eau de Parfum that smells like suntan lotion?” Writing from the Realm of Perfumaniacs™, I answer — why not? (I bought Fire Island after sampling it.)

(2007); Richard Herpin, perfumer. When I read the list of Coney Island’s foody, “carnival”-themed ingredients (margarita mix, melon, guava, cinnamon, chocolate, caramel, vanilla), I wondered how ‘grilled hot dogs’ and ‘French fries’ didn’t end up in the formula too. Coney Island is not as weird as it sounds though and, to me, it’s the least interesting of the three scents I’m reviewing here. I can imagine someone saying: “Let’s make a more humane version of A*Men!” If I had a rating system, I’d give Thierry Mugler A*Men: %^O (“Ew!”); Coney Island is a prettified A*Men and I’ll rate it: %^| (“ O.K.”).

Coney Island seems to separate into two layers upon application: a margarita mix-melon-guava layer and a dry, then sweet, then dry again chocolate layer. Coney Island’s chocolate-dessert phase lasts through mid-development on my skin and then gives way to a powdery choco-vanilla-musk-cedar wood base (with some “fruit” still discernable). There is, of course, a “fresh” accord wafting over all Coney Island’s ingredients and there is also a perfume-y/aldehydic vibe to the fragrance.

Saturated with rum and cachaça (and sipping Pimm’s Cups up the wazoo), it seems I’ve loosened up this summer when it comes to ozonic-marine fragrances (the perfume equivalent for me of daring to wear a sarong in public) and I didn’t have to use my life preserver while testing any of these Bond no. 9 perfumes. What’s next? Trying out Axe body sprays? Stay tuned….