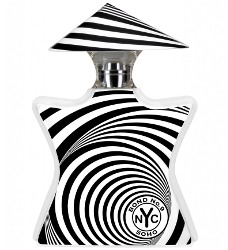 New York’s Soho has led multiple lives: colonial farmland … chic residential enclave … rowdy theatre and tavern terrain … the architecturally important light manufacturing zone known as the Cast Iron District … artists’ loft territory. And today? Today it’s morphed yet again— into luxury shopping turf, with every major designer ensconced in those characteristic, cavernous cast iron spaces. And by evening, still another transformation, into a quiet, stroll- able neighborhood. Yet no matter how it’s redefined itself, Soho has retained a durably distinct identity, separate even from the rest of hip-and-cool Downtown. Attracting locals and visitors alike, Soho has its own longlasting sillage, as we perfumers call it, blending high-end and edgy style.