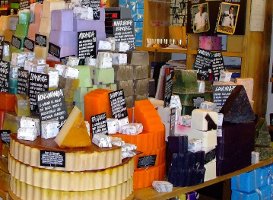 Lush began as Cosmetics To Go in 1988; the UK-based company, founded by Mark and Mo Constantine, was reconstituted as Lush in 1994. By 1997 they had 19 stores, by 2015, they had 900+ boutiques and spas worldwide. The Lush company espouses environmental activism and frequently donates a percentage of proceeds to environmental and/or humanitarian groups. They are also routinely included on lists of "best companies to work for".

Lush specializes in eco-friendly soaps and bath products, and features fun — but minimal — packaging and quirky names (Demon in the Dark soap, You Snap the Whip body butter).

Fragrances come and go, although the best-seller Karma is usually in production. Other fragrances include Go Green and a new solid perfume range (2007, see reviews of Silky Underwear and Potion), The Olive Branch, Sakura, The Comforter & Snow Showers (2008), Vanillary (2009), So White & Candy Fluff (2010).

In 2010, the perfume line was reorganized under the name Gorilla Perfume at Lush (see below). At that time, a number of older Lush fragrances and some fragrances from the brand's discontinued 'sister line', B Never Too Busy To Be Beautiful, were added to the range, including Ginger, Flower Market, Icon, Vanillary and Karma (all from Lush); and Dirty, Ladyboy, 1000 Kisses Deep, Dear John, Cocktail, Breath of God, Inhale & Exhale, B Scent, Superworld Unknown and Love (all from from B Never).

2017: What Would Love Do, Rentless, Tank Battle

2018: Assassin, Cocktail, Metamorphosis, Orange Blossom, Over And Over, and Two More Hearts

See all articles on Now Smell This tagged Lush or B Never.

Read Lush couple with a shed load of ideas at the Guardian.