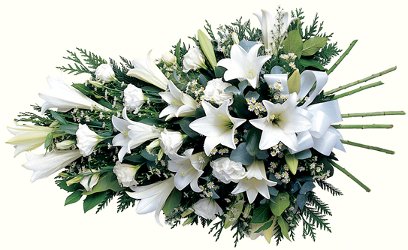 There are some oddball niche lines out there, but it's hard to imagine any other mainstream brand the size of Lush — much less a mall chain the size of Lush (over 900 stores) — launching a fragrance collection under the name Death, Decay and Renewal. The individual fragrance descriptions emphasize the renewal part as much as the death and decay part (the collection is "inspired by the cyclical nature of life", and do watch out for that ear worm), but still, it would be a surprise from anybody else.

Even then, I didn't necessarily expect Death & Decay, one of the nine scents in the series,1 to smell quite so much like, well, death and decay. Yes, the opening is true to the name and the bottle design: a mass of white lilies, just past their prime, sweet and full and indolic, diligently edging their way over towards mothball territory. Does it have an overtly gloomy aspect, or am I just influenced by the name? It doesn't really matter, because we don't linger here long. Soon enough, the lily fades away, and Death & Decay settles into a softer (and cleaner) floral blend, with the emphasis on the ylang ylang and its banana-jam undertones (other notes include rose, jasmine and tonka bean). It's pretty, and has a sunny, tropical feel that suits the second half of the Death & Decay description:

Let it transport you to a serene space where the fullness of beauty and its inevitable decay can be contemplated without fear. The message is one of meditation, acceptance and optimism delivered in a glorious, floral flourish.2

I'll go for that.

Verdict: Nicely done and worth a try for white floral fans, but not, for me, a must have. I'd certainly wear it if I had a bottle, but the bottle I have came from Lush so I'll be giving it away, along with Kerbside Violet and All Good Things — watch for a contest early next week. If anyone has tried any of the others in the series, do comment!

An aside: I'll add that every time I wore Death & Decay, I wished that Lush would do a Ylang Jam shower gel to match Rose Jam (they've already got Flying Fox for a jasmine jam).

Lush Death & Decay is currently available in 30 ml (£30) or in a 12 g solid (£8). It can be found in the UK and other countries but not, as of yet, the US. The bottle shown above is neither of those (the 30 ml size is a dropper bottle, thinner than that, and with a different top) so perhaps more sizes are to come?

2. The first part: "The pure scent of lily mingles with over-ripe tones of indole to give this fragrance a pungent, narcotic headiness." Via Lush UK.