Three perfumes — Le Labo Another 13, Jo Malone English Pear & Freesia and Lust by Gorilla Perfume at Lush — in search of a theme. Sorry folks, we have no theme. 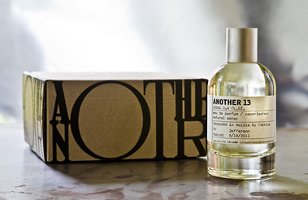 Le Labo's new Another 13, their limited edition fragrance with AnOther magazine, is one of several recent ambrox-heavy1 scents. Unlike Juliette Has A Gun's Not A Perfume, this one is actually a perfume, that is, someone (in this case, perfumer Nathalie Lorson) took the time to mix the ambrox with other notes (in this case, apple, pear, green citrus and ambrette).

Anyone remember Escentric 02 by Escentric Molecules? That was another ambrox vehicle, and despite the completely different notes (it featured vetiver, muscone, orris, elderflower extract and hedione), they're not as different as they sound. Maybe anything with lots of ambrox is going to end up smelling mostly like ambrox? Mind you, they're far from identical. The Escentric 02 is brighter in the opening, and softer and earthier in the dry down. The Another 13 seems more linear — it mostly smells like ambrox and wood — and frankly, it's loud. Whether or not you'll find it loud in a good way or a bad way depends on your taste. Le Labo, in the ad copy, described an "animal quality that hurts so good"; Stylecaster's reviewer noted that...

We're a little weary of its "animal quality" notes...

Well, there's animalic and then there's animalic. Ambrox does not smell nearly as animalic to me as vintage perfumes with real ambergris. Still, Another 13 is satisfyingly dirty, and although I find the Escentric 02 easier to wear, they both strike me as sexy. The Another 13, though, has the feel of a set piece, and I can see why you might weary of it. I wouldn't mind having a bottle — it's just sort of fun, and I bet it would be good for layering — but I can't imagine wearing it very frequently.

Le Labo Another 13 is a limited edition run of 500 bottles. It will be available at Colette, Le Labo, Barney's and Liberty. 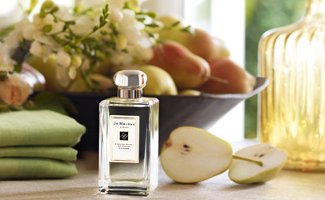 I don't love pear or freesia — at least, not in perfume — so I did not expect to love Jo Malone's new English Pear & Freesia. In fact, I mostly expected to hate it. I thought it would smell like shampoo, and not a shampoo I wanted to use. As it turns out, it surprised me: it doesn't really smell like shampoo, and it doesn't have enough personality to have any strong feelings about it either way.

English Pear & Freesia smells like they started with the shampoo, but wanted to darken it up for fall. The obvious suspects for such a job, amber and patchouli, were too dirty, so they cleaned them up as much as you possibly can without being accused of false advertising, and then added a dollop of rose plus some of that laundry detergent musk that I nearly never like. The result is darkish — not dark, mind you, just darkish — but as resolutely clean as you can get while still accomplishing the idea of darkish. It's crisp in the opening, then it's flat and sort of faceless, then it floats away into nothingness. I kept forgetting I was wearing it at all. I probably would have preferred the shampoo.

The reviews at MakeupAlley are largely positive, so pay me no mind and give it a try.

Jo Malone English Pear & Freesia was developed by perfumer Christine Nagel; the notes include pear, freesia, rose, patchouli, amber and white musk. It is available in 30 and 100 ml Cologne Spray.

Lust by Gorilla Perfume at Lush 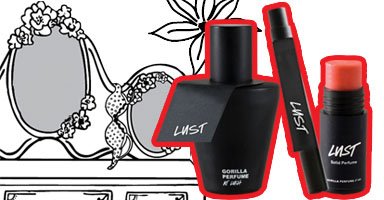 If you really, really, REALLY like jasmine — as in, Serge Lutens A La Nuit strikes you as a jasmine for sissies — you could always try Norma Kamali's Jazmin or Bruno Acampora's Jasmin. If both of those are about the right amount of jasmine, but they're just not sweet enough for you, you need Lust, from the Gorilla Perfume at Lush line. Lush calls it an "unashamedly carnal jasmine", and maybe it is — it is STRONG, that is for sure. But it's also way too sweet for me, and I wish they'd toned it down a notch, or made the base darker and woodier to compensate. Applied VERY lightly (I'm yelling a lot in this one, aren't I?), by spraying the air about an inch above my arm, I find it pleasant, otherwise, I'm overwhelmed by SWEET.

It really does calm as it dries down. Unfortunately, as it calms, the jasmine fades but the sweetness doesn't. It starts as jasmine candy, indolic and slightly fizzy, and ends as more of a mixed-floral candy, a bit more vanillic, a bit less indolic. It isn't really my cup of tea but I had fun wearing it.

Please note that I tried Lust in the 10 ml spray, which according to Lush is lighter in concentration than the 30 ml spray (15% instead of 20%). Perhaps what I need is the solid (10% concentration).

Lust by Gorilla Perfume at Lush has notes of ylang ylang, rose, vanilla and sandalwood; it's available in 10 or 30 ml, or in a twist-up solid.

1. You can find a description of the smell of ambrox in the review of Escentric Molecules' Molecule 02 (scroll down).