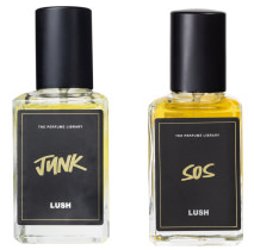 In conjunction with their new store in Liverpool (their largest), Lush has launched two new fragrances, Junk and SOS. There are also 27 reissues available in the store's "Perfume Library", some of them can also be found online in the UK. Reissues include...

Junk ~ "This is the first fine fragrance created by Emma Dick. [ed. note: see.] Originally called Blackberry Hill, Mark changed the name to Junk as he was inspired by the Leonard Cohen lyric, ‘Took my diamond to the pawnshop, But that don’t make it junk.’ ... Lemon, rosemary and sage combine into a fresh herbal perfume with a fruity blackcurrant twist. Not a throwaway perfume - one to savour." £35 for 30 ml.

SOS ~ "This perfume shares the same fragrance as the ever so popular Orangutan soap and SOS shampoo bar. With regeneratively sourced patchouli from a permaculture site in Sumatra. A wild, underground ode to patchouli and Brazilian orange that’s not for the fainthearted. Vivacious juicy notes promise renewal in the bleakest of times." £35 for 30 ml.