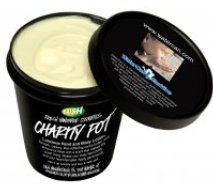 Charity Pot, a newcomer to Lush’s shelves, wears its conscience on its sleeve — or rather, on its lid. According to Lush, all proceeds from the sale of this fragranced lotion will benefit a number of charitable organizations and activist groups, which are identified by stickers on the tops of the containers.

When I purchased a tub of Charity Pot in the United Kingdom last spring, it was designated with the logo for No Widening M1, an alliance opposed to the widening of the M1 motorway in England. Since then, I’ve been curious to see which organizations would be chosen for the North American launch of this product. So far, the list includes Clean Ocean Action, Amazon Conservation Team, Tree People, UNICEF, International Fund for Animal Welfare, and WaterCan. And, like all of Lush’s other products, this one is produced with ecological and environmental awareness, since no animal testing is allowed, limited synthetic ingredients are used, and the packaging is kept as minimal as possible.

What about the lotion itself? Charity Pot is concocted from fair-trade cocoa butter and almond oil, so it provides excellent moisture for the skin, although it does take a while to absorb. Its consistency is a bit thinner than that of Lush’s fluffy Dream Cream, but thick enough to sit easily in its tub-like container. It is scented with essential oils of geranium, ylang ylang, tagetes (marigold), and gardenia, and the scent does last for a few hours if you apply the lotion generously.

At first sniff, Charity Pot’s pairing of geranium and ylang ylang reminds me of Lush’s wonderful, but discontinued (in North America, at least) Black Magic massage bar: it has an unexpected, peppery-sweet twist. I’m not sure what marigold smells like, and I can’t detect the gardenia extract; in any case, the lotion’s fragrance isn’t typically floral. It settles into a blend of leafy herbs and creamy powder, which I enjoy very much, because it is slightly odd yet soothing at the same time. Charity Pot seems like a return to form for Lush, in both its philosophy and its fragrance, although it may not please the customers who have been flocking to buy the company’s recent string of toffee- and marshmallow-scented products.

A final thought: I’ve never heard the expression “charity pot” before, so perhaps it’s a British term. I picture a charity pot as looking something like those kettles that the Salvation Army workers set up on the sidewalks around Christmas-time, when they sing carols and ring bells, and passersby are encouraged to drop cash into the kettles. Lush plans to make its own Charity Pot a permanent addition to its product line, however, so it will still be here long after the upcoming holiday season.

Charity Pot sells for $19.95 for a 7.9 ounce jar in Lush shops and through the Lush website.