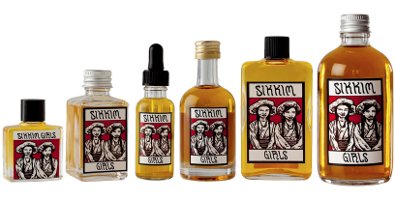 I've been a Lush customer for over a decade, and I've followed the various permutations of the company's fragrance line with interest, from B Never Too Busy to Be Beautiful to Gorilla Perfume and everything in between. Lush's latest fragrance line has delighted me so far; as Robin has said, Mark and Simon Constantine continue to produce "unusual, well-crafted and reasonably priced perfumes whilst seemingly paying no mind to the conventions that rule the rest of the fragrance industry."

Sikkim Girls is described as "subtle, seductive, heady, exotic, floral...frangipani, jasmine, vanilla and tuberose conjure up exotic climes and heady possibilities." Its name comes from an anecdote related by the musician Sheema Mukherjee: Mukherjee met a café owner in Darjeeling who claimed that his son-in-law had been lured away by two "Sikkim girls," unlikely sirens who entranced him with their feminine wiles despite being fully, even modestly, dressed. Its white floral notes, appropriately enough, are traditional but surprisingly heady, not to mention quite long-lasting on the skin.

Like many Lush fragrances, Sikkim Girls comes on strong and just a bit raw-edged. Its intermingled floral notes appear up front, without any need for a gradual introduction. The jasmine is sweet, the tuberose is creamy, and the vanilla is lightly earthy. I notice a lot of frangipani, and I like it more than I expected to, perhaps because it's not spiked with citrus notes or coconut. (When Sikkim Girls evokes the "exotic," it's aiming for something more interesting and sophisticated than a tropical beach fantasy-cliché.) The composition also seems to include a soft, milky-almondy note that reminds me of mimosa.

Overall, Sikkim Girls smells very feminine, and it's one of the more "perfume-y" scents in the new Gorilla line. However, it still manages to stay lively enough to avoid the "old-fashioned" label. (Don't get me wrong: I like vintage-y fragrances, but white florals tend to feel a bit prim and stuffy for my taste if they're not done right.) If I were to draw some comparisons between Sikkim Girls and other white floral blends, I could call Sikkim Girls a hippie cousin to Annick Goutal's frangipani-jasmine-vanilla Songes, or say that it's a more "natural"-smelling alternative to Madonna's Truth or Dare. And, although it's more light-hearted than fragrances like the iconic tuberose Robert Piguet Fracas, it does feel informed by classical white florals. On the other hand, I'd like to enjoy Sikkim Girls just on its own merits.

Sikkim Girls has impressive sillage for its first hour or two; I wore it on a chilly early-spring day, when I was in and out doing neighborhood errands, and every time I removed my gloves or scarf I caught a fresh wave of fragrance. As it wears down, Sikkim Girls stays closer to the skin, but it still has impressive staying power. I suppose this fragrance has been successful in its seduction of this particular wearer (me!), and if you're in the mood for an artisanal-feeling white floral fragrance, you may also succumb to its spell.

Lush Sikkim Girls is available in a range of sizes from 9 ml ($19.95) to 92 ml ($99.95), in an assortment of stopper bottles and splash bottles. For purchasing information, see the listing for Lush under Perfume Houses. As of this writing, the following stores in the US have the collection: Portland, OR; New Orleans; Bucktown, Chicago; Glendale, Los Angeles (limited time); Partridge Creek, Detroit (limited time); Union Square, New York City; Walnut Street, Philadelphia and Austin, TX. Look for the set to appear in additional stores for a limited time over the summer.