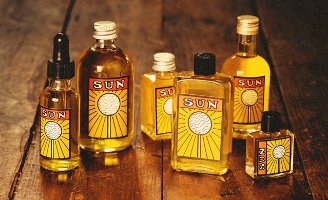 Lush has launched 9  new fragrances in the Gorilla Perfumes range, all of which were introduced at the Lushfest festival over this past summer: Sun, Devil’s Nightcap, Flower’s Barrow, Hellstone, The Bug, The Voice of Reason, Euphoria, Sikkim Girls and Furze.

Sun (shown) ~ "During the cold winter, Mark Constantine longed for warmth. Mark travelled to the U.S.A in Spring, compiling a soundtrack like Simon and Garfunkel’s ‘America’ to listen to while driving down the New Jersey turnpike to Cape May. Visions came to him of a big orange sun on a lollipop stick...orange, tangerine and sandalwood grace this fresh scent."

Devil’s Nightcap ~ "One of the most mysterious megaliths stands in the town place of Studland, known as Agglestone or The Devil’s Nightcap. Folklore from 1866 claims his Satanic Majesty threw the stone across the sea, attempting to hit Corfe Castle. The stone was first noted by Borlase in 1058, who described it as “the great stone of men” - and he attributed Druidic properties to the rock. To capture this magic, oak moss, clary sage and ylang ylang were used."

Flower’s Barrow ~ "There are stories about an Iron Age hillfort above Lulworth Cove. It seems to have been taken over by the Romans, who are said to haunt the place known as Pines Hill or Flower’s Barrow. Climbing the steep hills to explore this magical place, Simon dodged explosives used by the Ministry of Defence! The ancient fort has sunk into the sea and nettles and brambles have taken over the land. To capture the spirit of this place in scent, Gorilla has utilised well-used herbs like sage and thyme, as well as geranium and blackcurrant."

Hellstone ~ "We find Simon Constantine in cold January, trudging across fields searching for the eerie spot known as Hellstone. The ancient Hellstone megalith was used as a burial mound 4000 years ago! As written in 1803, lore has it the Devil flung this stone! Inspired by the smells of unearthed roots and freshly turned earth, the Hellstone inspired perfume uses vetivert, cumin and beeswax."

The Bug ~ "Also inspired by music, Mark and Simon feel the paranoia of the modern age with The Bug. Thoughts drift to ominous surveillance cameras...voices whispering in the ears...hidden secret police and anonymous hackers...ideas for a ‘protest perfume’ emerge - a disjointed scent for our times using such unique fragrances as galbanum and black pepper."

The Voice of Reason ~ "Inspired by the beat generation and the spoken word comes literary figures like; William Burroughs and Neal Cassady and bards like Gil Scott Heron and Leonard Cohen at street corners, basement clubs and claustrophobic coffee shops. With the strong aroma of French Gitane cigarettes and espresso...sandalwood and the tonka bean are major ingredients."

Euphoria ~ "Like ‘Sun’, Mark longed for other healing scents, to make one feel a kind of euphoria. Taking cues from books on aromatherapy, euphoric sensations were conjured using clary sage, grapefruit, lime and neroli."

Sikkim Girls ~ "Musician and composer Sheema Mukherjee was inspired after she had an experience with the Sikkim Girls. While hanging out in the oddly named ‘Hot Stimulating Café’ in Darjeeling, the café owner warned Sheema to stay away from the dangerous Sikkim Girls. When asked why, the owner said they had seduced and stolen away his son-in-law. Somehow they had accomplished this whilst covered head-to-toe and simply with a subtle yet sexual sway of their bodies."

Furze ~ "Looking out of the back door of his new home, Simon found inspiration in his own garden with Furze. Furze is a very British plant and the prickly bush is also known as gorse. It even flowers in the winter. Lore has it that the flower was used by the Vikings to brew beer and if grown on your property, Furze could protect from curses or hexes - made into a broom, it could ‘sweep’ away evil influences. Adding coconut and vanilla, this fragrance is sure to protect its wearer from evil!"