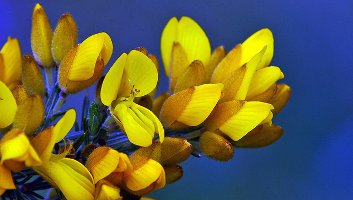 If you'd asked me in, say, 2006, if I needed or wanted a beachy coconut sort of perfume, I probably would have laughed.1 That was the year that Estee Lauder launched Azuree Soleil Eau Fraiche in collaboration with Tom Ford, and I didn't bother to smell it until they reintroduced it the next year, at which point I realized that yes, I did need a beachy coconut sort of perfume. Azuree Soleil turned into Bronze Goddess in 2008, and Estee Lauder has been releasing it in one form or another every spring since then (see this year's entry here). It's one of my summer go-to perfumes.

Even then, I would have guessed that my beachy coconut perfume needs were small enough that they'd be adequately covered by Bronze Goddess for the rest of my natural life. Nope — here comes Lush Furze to pile on. Furze is part of the latest crop of fragrances from Lush, all of which were inspired by the lore of the English countryside, and Stonehenge, and all sorts of related Englishness. Furze in particular was reportedly triggered by furze (gorse) bushes growing in the yard of Lush perfumer Simon Constantine. I don't know the smell of gorse, although I think it's botanically related to broom (which I do know), but anyway, Mr. Constantine thinks it smells a little like coconut and vanilla, and that's where he went with the Furze fragrance: coconut, vanilla, mimosa, neroli.

The start is discordant in a way that few niche or mainstream fragrances are these days, when the first few seconds' performance on a blotter are sometimes all that matters. Oh, and it's strong. I thought for a minute or two that it might be a scrubber, but then all at once — poof! — it resolves into a sort of milky green floral-coconut-vanilla with herbal undertones, all finished off with a dusting of cosmetic powder. It gets a bit earthier and woodier in the far dry down, and some of the creamy sweetness fades. The lasting power, by the way, is excellent.

It's a quirky fragrance — not so quirky that it's hard to like or wear, but still, a little quirky — and seems like a happy collision of elements that ought not work together, but somehow do. The tone isn't really overtly beachy, and Furze has enough backbone that you needn't relegate it to summer-only wear, but like many people, I've been conditioned over time to smell coconut and think of a tropical beach — for me, the association is inescapable. Likewise, any coconut perfume I smell, I will compare to Bronze Goddess. So in my (overly compartmentalized) mind, I think of Furze as a mash-up between the Mediterranean beach of Tom Ford's (supremely commercial) imagination and the English countryside of Simon Constantine's (decidedly unorthodox) imagination, and I'm guessing I'll wear it (yes, it's on my buy list) when Bronze Goddess seems too staid, although I can confirm that it works quite nicely as a winter comfort scent too.

Lush Sun is more overtly summer-ish, and Lush's own descriptions of Sun as "a big orange sun on a lollipop stick" and "zesty Orange, tangy Tangerine and a Mimosa fizz recline atop sultry Sandalwood for a real taste of The Sun" pretty much sum up what it's all about, although my main complaint about Sun is that the dry down is maybe a wee bit more flat than all that might imply (and I would say the same about Atelier Cologne's Orange Sanguine, which I bought but rarely reach for). Still, it's worth a shot, especially if you don't already have the orange category all taken care of in your own collection.2 I found it very enjoyable, if not as unusual (or long lasting) as Furze, but I liked it best layered with something else — it plays nicely with the grapefruit and clary sage of Euphoria (from the same collection).

Coming up next week: a brief review of Lush Flower's Barrow.

1. Although I've always liked CB I Hate Perfume At The Beach 1966 as a kind of "scent memory" (coppertone!) and admit to finding J Lo's Miami Glow fun too. And then there's the smell of the beach itself, sans sunscreen: Comptoir Sud Pacifique Aqua Motu.

2. My orange of choice: Guerlain Acqua Allegoria Mandarine Basilic, and at the top of that review, there's a list of some other decent orange fragrances.