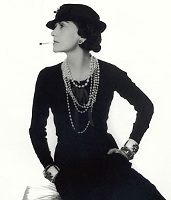 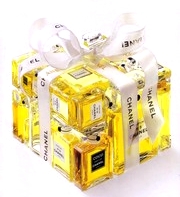 Fashion design house founded by Gabrielle "Coco" Chanel in 1910. Chanel was known first for her hats, and later for the relatively relaxed but elegant fashions that replaced corset-based styles with simple jersey suits and dresses, and later, pants. The iconic Chanel suit was introduced after the war, in 1954. Chanel died in 1971.

The first Chanel fragrance, Chanel No. 5, was launched in 1921, and like other early Chanel fragrances (Chanel no. 22, Bois des Iles, Gardenia and Cuir de Russie) was created by perfumer Ernest Beaux. Various apocryphal stories surround the creation of Chanel No. 5, including the well-known tale that the final formula was the result of an error on the part of Beaux's assistant, who mistakenly increased the intended amount of aldehydes. Regardless, No. 5 was a huge seller and became one of the world's best known perfumes.

Jacques Polge has been the house perfumer at Chanel since 1978. His son, Olivier Polge, was announced as his successor in 2013. Perfumer Christopher Sheldrake joined Chanel in 2005.

These are available only at Chanel boutiques or from the Chanel website, or at Bergdorf Goodman, selected Nordstrom (Seattle has them) and Saks stores.

At department stores and online fragrance discounters. Your best bet for the harder to find fragrances is directly through the Chanel website (see below). See also: shopping report for the Chanel boutique at Saks Fifth Avenue in New York.

See all articles on Now Smell This tagged Chanel, or check out our collection of Chanel fragrance commercials.

Read a book review of Tilar Mazzeo's The Secret of Chanel No. 5: The Intimate History of the World’s Most Famous Perfume.

Read The Chanel No 5 Story at The Independent.