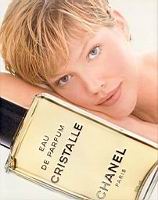 I am a creature of habit. To this day, I prefer Roger Moore to Sean Connery because Roger Moore was the James Bond I grew up with. Sean Connery may be better, but he'll never be Bond to me because I didn't see his movies until later, and by then, well, he just didn't look like Bond. Forget about the Bonds who came after Roger Moore, they're not even worth discussing.

So it is with Cristalle. Chanel introduced the Cristalle fragrance as an Eau de Toilette in 1974. It was developed by perfumer Henri Robert. It was (and is, if you can get your hands on the Eau de Toilette) light, crisp, and sparkling, just a little veil of lemon, fresh herbs and oakmoss with lots of green and a few flower petals thrown in for good measure (other notes include bergamot, jonquil, jasmine, honeysuckle, rosewood, hyacinth and vetiver). I started wearing it in the late 1970s and I adored it. The first spritz was always so bright and sharp, it cut right through the heat and humidity of a Washington, DC summer. The lasting power was negligible, but you can't get that kind of light, crisp and sparkling and staying power, that is just how it is.

It smelled like summer, and therein laid the problem for Chanel: women only bought it in the summer, and Chanel much preferred that it sell year round. In 1993, in the hopes of reversing this seasonal trend, they introduced the Eau de Parfum, created by Jacques Polge. Polge took the original light chypre fragrance and turned it into a deeper, more complex fruity floral. Mandarin and peach softened the impact of the lemon, the green notes were toned down, and the jasmine and other floral notes (including lily of the valley and iris) became the focal point. The base notes are warmer and richer, and as you might expect, it has much greater lasting power than the Eau de Toilette.

The Eau de Parfum is probably a lovely scent. If I had smelled it before becoming accustomed to the Eau de Toilette, perhaps I would adore it. For that matter, if it wasn't called Cristalle, I might be able to approach it with a more open mind, but as things stand, the Eau de Parfum strikes me as something of an imposter: it not only doesn't smell like Cristalle, but it seems to me to miss the entire point of Cristalle, being neither light nor crisp nor refreshing. Of course, if you hated the original, the Eau de Parfum might be more to your taste.

Chanel Cristalle Eau de Toilette has become harder to find. Many department stores carry only the Eau de Parfum, and more than once, I've been told by a Chanel sales associates that there is no such thing as the Eau de Toilette; they haven't made it in years, etc. In fact, it is still in production, and hopefully, someone besides me is still buying it: I live in fear that it will eventually be discontinued.

Why I Love Old School Chypres