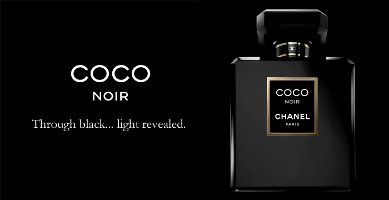 So, I had high expectations for Chanel Coco Noir. Chanel Coco is already sultry enough for Mata Hari. A noir version? Well, look at Caron Narcisse Noir. It’s loaded with menace and seduction. No way Chanel would let me down. Coco Noir would surely twist Coco’s spicy, woody heart into a real femme fatale.

Not. They should have called it Coco Pourpre.

In Women's Wear Daily, Christopher Sheldrake, also a Chanel perfumer, calls Coco Noir a “luminous, transparent oriental.”1 To me, Coco Noir smells like an elegant rendition of purple fruit, soap and patchouli. In other words, it’s a fragrance you’ve been smelling everywhere from Macy’s to Walmart, only more finely calibrated here. As Sheldrake says in the same article, “We are careful not to launch a lot of fragrances — we choose to create scents that represent an era, not a passing fancy.” Frankly, this is an era that can’t end soon enough as far as I’m concerned.

Coco Noir’s patchouli, musk and purple fruit are evident from first spray, and they continue on until the fragrance peters out eight hours or so later. Under the blanket of fruit, musk, and patchouli, I do initially smell a citrus sparkle and then Coco Noir’s heart of mellow green rose and geranium leaf tingling with jasmine. Underneath all that fruit, patchouli and musk lies a tantalizing fragrance, with the cool, impressionistic feel of Monet's water lilies. But I challenge you to dig it out from Coco Noir's sweet-soapy haze.

Coco Noir’s heart burns off within an hour, leaving the fruit, soapy musk and patchouli heavyweights stomping along until you either yell “Uncle!” and scrub it off, or a full day has passed and the fragrance has dialed down to zero at last. At this point, Coco Noir smells no different than scores of other fruitchouli fragrances sold at a fraction of the price.

Supposedly, Jacques Polge was inspired to create Coco Noir when he saw an opaque black version of the classic Chanel bottle. What a beautiful bottle it is, and what an amazing fragrance it could engender. But perfume is big business. Perhaps even noses as influential and talented as Jacques Polge and Christopher Sheldrake can’t win when the business office waves its trend forecast in the boardroom. Or perhaps Polge and Sheldrake really do see Coco Noir as a “luminous oriental” fit to take its place next to No. 5 and Coco. I don’t know. If the reaction at my local Nordstrom is any indication, Coco Noir will sell like gangbusters. But for me, I’ll take the original Coco and get my noir elsewhere.