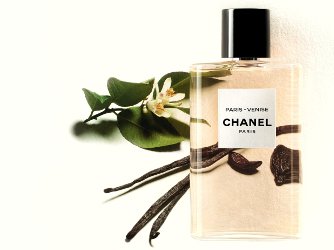 Wow, has it been hot. Where I live — and now in Paris, where I’m spending a chunk of August — summer has been one heat wave after another. What’s a perfume-loving girl to do? Turn to light, fresh fragrances, of course, like Chanel Paris-Venise Eau de Toilette.

Paris-Venise is one of the three Eaux de Toilette from the new Les Eaux de Chanel collection (the others are Paris-Deauville and Paris-Biarritz). Perfumer Olivier Polge developed all three. Chanel describes Paris-Venise as: "A fresh oriental trail inspired by the exotic and enchanting city of Venice, one of Gabrielle Chanel's favorite places.” Its notes include citrus, neroli, red berries, iris, Grasse geranium, cedar, amber accord and vanilla.

Of the three Eaux, Paris-Venise is the one that grabbed me. The idea of an oriental cologne was intriguing. Yes, I like a zesty cologne on a hot day, but I don’t always want to smell like a golf club shower stall. Yet I think of oriental fragrances as too complicated and ambery to be refreshing.

Paris-Venise does the job nicely. Its citrus veers more toward neroli than tart lime, and a hint of currant gives it the deliciousness many oriental fragrances have without turning sweet. Its cedar and geranium make Paris-Venise tingle in the nose. Subtle vanilla and amber smooth its edges.

Mostly, Paris-Venise doesn’t come off as particularly complex or fussy, and I mean that as a compliment. Think of it as a glass of barely sweetened, vanilla-fruit-infused iced tea when you’re thirsty, instead of the lemonade you usually drink. It’s not that Paris-Venise smells like iced tea, but that relative to traditional colognes, you might think of it that way. To keep the beverage analogy going, Chanel Coromandel or Coco might be a Bordeaux wine to Paris-Venise’s tea (and, for you oriental lovers, a bare dab of Coco would be a nice way to top off Paris-Venise when the day cools).

As you might expect, Paris-Venise has modest sillage unless you really spray yourself down. After a few hours, it has mostly vanished from my skin.

One more note: The Paris-Venise bottle is a throwback to old No. 5 cologne bottles with its tall, rounded sides and heavy, engraved cap. It feels good in the hand, and although, at 125 ml, it’s a large bottle, it’s slender enough to be easy to spray. Its atomizer delivers a satiny mist.

What fragrances do you turn to in a heat wave? Have you found a good cologne that’s not a citrus salad?

Chanel Paris-Venise Eau de Toilette is $130 for 125 ml. It’s also available as a body lotion and as a bath and shower gel. It’s available at Chanel boutiques or directly from the Chanel website.