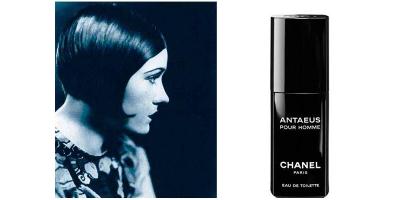 My friend Carmen, who’s a nurse at a big Seattle hospital, recently said to me: “I’m turning into a man.” This being Seattle, I thought she might be thinking of having a sex change operation. When I asked her to explain herself, she said she’d noticed as women age they become more masculine looking (and men start to look more feminine). Females “toughen” — males “soften.” In perfume years, Chanel Antaeus is an elderly “guy”: 30 years old…and unless my nose is fooling me, Antaeus has become more feminine with age.

Antaeus*, developed by Chanel house perfumer Jacques Polge, begins with the scents of aldehydes, moss and a vibrant “green” note (part sage, part pine needle?) As the aldehydes/moss burn off, I smell a mild leather aroma blending with a wonderful honeyed tobacco note. The base of Antaeus smells of sweet, soft (almost powdery) woods and musk. Antaeus is smooth and rather linear; it has minimal sillage and decent lasting power. (Antaeus reminds me a bit of Estée Lauder Azurée without the floral notes.)

The majority of people I let smell Antaeus thought it was “old fashioned” and “for women.” I remember Antaeus in the Nineties being more ‘masculine’ (powerful, complex, “tougher”) than it is today. I don’t mean to suggest women are less powerful, complex and tough than men, but Antaeus smells more womanly than it used to smell. (Or has the rise of niche perfumery and “unisex” fragrances, and my non-stop sampling of hundreds upon hundreds of new fragrances over the years changed my perspective…and perception…of what’s masculine and feminine in perfumery?) Antaeus is a great cologne, and it can certainly be worn by men (as can any fragrance); but I imagine there’s a large number of women who would love Antaeus if they ever gave it a chance, especially women who enjoy wearing “retro” perfumes full of moss, aldehydes, soft woods and a dash of labdanum-tobacco.

Chanel Antaeus is widely available (though perhaps in limited production — every year my Nordstrom runs out of it for several months and creates customer waiting lists). Antaeus retails at $72 for 100 ml Eau de Toilette.