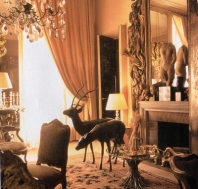 Coco Chanel lived at the Ritz for most of her life, but she kept an apartment above her boutique at 31 Rue Cambon "as a place to house her own clothes and host dinner parties" (via travelandleisure):

The décor is ornate and baroque with the artefacts ranging from lacquered Coromandel screens with Chinese paintings to elaborate life size models of deer ranged in front of the fire place. The mirrors have elaborate oversize frames while the chandeliers replicate the double "C" symbol used as a brand logo in most products including bags and belts. Everything in the rooms reflects the concept of duality in her products with nearly each antique or display piece having a twin beside it. (via thehindu)

31 Rue Cambon, the apartment's namesake fragrance from the recent Les Exclusifs collection, is likewise ornate, or at least, more so than the rest of the collection*. Jacques Polge, the in-house perfumer at Chanel, described it as an oakmoss-free chypre with a "dry, musky, nutty scent"; the notes are said to include bergamot, iris, jasmine, patchouli and labdanum.

31 Rue Cambon is, in my humble opinion, the best of the collection. It starts with bright, rich citrus and leads into a stylised blend of florals over a chypre base. Like any modern chypre, it is oakmoss free, oakmoss now being verboten in any serious concentrations, but unlike most modern chypres (I am still puzzling over Miss Dior Cherie), it smells like a chypre. It is, as advertised, very dry, and has a musty-earthy quality that evokes oakmoss without exactly smelling like it.

The musty-earthiness recalls any number of vintage fragrances, still, 31 Rue Cambon has a decidedly up-to-date aura, very chic and spare, with a satisfying depth that doesn't feel heavy or old-fashioned. The peppery iris in the base is lovely (and even more so if you layer it with 28 La Pausa) and the sillage and lasting power are both good for an Eau de Toilette. If you only have the time and energy to try one of the set, this is the one I'd recommend.

So what of the Les Exclusifs as a whole? Well, first off, they are well done, each and every one* of them. The materials are first rate, they are all wearable without being dull, and they are "worthy of the name of Chanel", whatever that means. Even the relatively simple Eau de Cologne is lovely, although unless you need your Eau de Cologne to say "Chanel" on the label, I'm not sure you couldn't do as well for less.

Victoria noted at Bois de Jasmin that "I cannot help but think of these fragrances as accords rather than as grand French perfumes..." and that is true enough, I suppose, but that is the modern style, and as the style happens to suit my own preferences, I'm not likely to complain. But do they, as Luca Turin asserts, "permanently change the landscape of perfumery"? Well, I don't know that I'd go that far, although I can understand his sentiments given how awful things could have turned out: the day Chanel launches six vapid niche fragrances at once, we might all just as well put away our toys and go home.

Still, I can't help but wish that the collection as a whole was more daring. As much as I'd dearly love to have a vat of of 28 La Pausa (and it would have to be a vat, as it fades quickly), 31 Rue Cambon is the only one that struck me immediately as new and unusual; it is the only one I'd be likely to recognize if it passed me on the street, as it were. Given that Chanel is rather late to the niche game, Hermes and Armani (and in a lesser way, Prada) already having entered the arena, and given how little time we have these days to get to know the latest thing before the next latest thing is released, I'm not sure that one really unusual entry out of six is enough. In fact, I'm not sure these multi-scent releases are such a good idea in today's landscape at all, although it is easy to see why they are attractive to the perfume houses.

A little poll, for anyone who has time to comment: did the collection live up to your expectations? And if you could have one set, absolutely free, which would you choose: the Chanels, the Hermessences, or the Armani Prives?