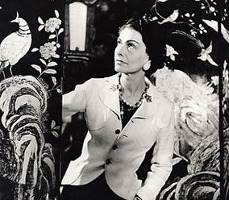 Chanel will follow Hermès (Hermessences) and Giorgio Armani (Armani Prive) into niche perfume territory next year with the introduction of Les Exclusifs de Chanel in February. The line will include ten fragrances, each in a 200 ml spray for $175. Four are from the existing range (Chanel no. 22, Bois des Iles, Gardenia and Cuir de Russie). The six new fragrances, all from Chanel house perfumer Jacques Polge, are:

Coromandel ~ "named for the Chinese lacquered screens Gabrielle Chanel collected, is a spirited oriental with amber and dry notes".

28 La Pausa ~ "built around an iris note, is named for a house Mlle. Chanel owned in the South of France."

No. 18 ~ based on ambrette seed and "named for the Chanel fine jewelry boutique at Place Vendôme".

The Les Exclusifs de Chanel line will have its own counter at Bergdorf Goodman in New York and will also be available at Chanel boutiques. (via Women's Wear Daily, image of Coco Chanel at 31 Rue Cambon via metmuseum) 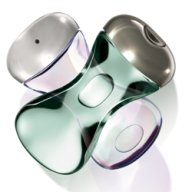 A new duo from Azzaro, Azzaro Now, will launch in March in Europe, in the United States in 2008:

Azzaro Now Women is a soft floral composed by Annie Buzantian and Alberto Morillas from Firmenich. The scent is formed around aldehydes, amber rum, white tea, and floral notes. Azzaro Now Men is a green woody accord by Lucas Sieuzac and Christophe Raynaud of Symrise. It includes notes of rose oxide, white leather and lichen. Created by Emmanuelle Royer (CBA Design), the bottles fit together like two bubbles in fusion. (via cosmeticnews)