While reviewing Chanel Égoïste, I became obsessed with smelling its progenitor: Bois Noir. After reading my Égoïste review, two Now Smell This readers offered to send me samples of Bois Noir from their rare and precious bottles of the fragrance, and I accepted (both men had bought their bottles of Bois Noir at Chanel in Paris). I also purchased a small sample of Bois Noir from a trusted online vendor in case any of the samples had dramatically changed over the 22 years since they were bottled.

Bois Noir had a discreet launch in 1987 (it was only available in Chanel boutiques) and was taken out of production quickly. When Bois Noir morphed into Égoïste in 1990, the “Bois Noir” name was forgotten…except by the lucky few who had bought bottles of the ‘original’ fragrance.

Bois Noir’s listed ingredients are mandarin, lavender, rose, coriander, Bourbon vanilla, sandalwood, rosewood and ambrette seed. I was almost “afraid” to wear Bois Noir because I feared it would make Égoïste seem pale and less interesting, but at the risk of arousing the ire of the kind Bois Noir donors who contributed to my Bois Noir vs. Égoïste “experiment,” Bois Noir is not that different from Égoïste.

When I wear Bois Noir next to Égoïste, I notice subtle differences: Bois Noir is richer and smells like parfum to Égoïste’s Eau de Toilette; Bois Noir’s rose and clove-y/spice notes are more rounded, ‘syrupy’ and ‘smoky’ than in Égoïste; and it’s pleasant to find a stronger dose of scarce ingredients — like sandalwood and rosewood — in Bois Noir. The rose-spice potpourri character of Égoïste is also present in Bois Noir, but ‘Bois Noir Potpourri’ could scent a larger room than ‘Égoïste Potpourri’. (The citrus I detect in Égoïste is missing from all my Bois Noir samples — getting old is a bitch.) Still, as Égoïste and Bois Noir dry down, they smell almost identical on my skin, and when I put on twice as much Égoïste as I normally do, the two scents are hard to tell apart. 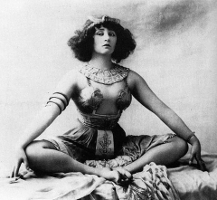 It seems most people believe objects from the past are better made, more lovingly created, and more beautiful than today’s ‘products’. At the museum where I volunteer, I always hear people pining for the past (“…if only the medical care were better!”) As I’ve gotten older, like Bois Noir, I’ve lost my sparkling top notes, my lemon-scented optimism. Not so long ago, I ignored ugly facts about people and places and eras I love; now, I face those hard facts head-on and look for deeper meaning, something to learn. Though it does not compare with my shocking discovery that Colette (one of my idols) sometimes, as a young woman, beat her small dogs with a riding crop to train them, the fact that Bois Noir is not really ‘superior’ to Égoïste is ever so slightly startling…but freeing! Colette mellowed as she aged and learned that kindness and intense observation led to the best-trained dogs — and men — and I’ve learned that chasing after what is gone, fretting over the “expired,” crying over the extinct, are draining, time-consuming and futile pursuits. We can all learn a few lessons from Bois Noir: 1.) if you like a limited edition fragrance or if you learn a beloved perfume is “on the way out” – buy as many bottles as you can afford; and 2.) if you missed out on a fragrance, remember that everything and everyone will eventually disappear, and never having smelled Bois Noir (or Jean-Marie Farina Extrait de baume de Pérou or Lubin Enigma or Rigaud Un Air embaumé or Parfums de Rosine Aladin) is NOT a tragedy.

Chanel Bois Noir is exorbitantly expensive and virtually impossible to obtain. (The Bois Noir bottle itself is a collector’s item and so rare that I’ve not been able to find a photo of it.) I’ve been told by one of my Bois Noir suppliers that fake Bois Noir is often for sale online (sellers simply put some ‘slightly evaporated’ or ‘aged’ Égoïste into a sample vial or bottle and call it Bois Noir). So, take a deep breath, exhale, and enjoy delicious Égoïste instead.

Note: top image is wood bark by benjamin_mercadier at flickr; some rights reserved, with Chanel logo superimposed by the author.

Second image is Colette in a publicity still for the 1907 pantomime Rêve d'Égypte via Wikipedia.

Update: many thanks to reader Jim "Griff" Griffith for sharing an image of his original Chanel Bois Noir bottle: 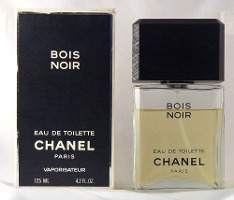