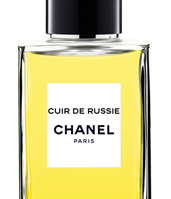 ...I easily imagine this perfume floating in the wake of a tall, slender brunette, whose moves are confident, who voice is accustomed to giving orders, and who fingers are slightly darkened by tobacco. She is one of those women who always wears a suit, even at midnight at the Savoy; one of those women captivating to watch at the casino in Monaco, who after having lost a sum of money, takes bills and a money order from a love letter hidden in her fine leather handbag, where they have taken on a pungent, slightly wild odor, and with great calm throws them on the green baize of the gaming table.1

Wowee! Who could resist a fragrance like that? (Let's hope the copy writer went on to a career as a novelist.) But by dint of perspective or reformulation, today's Cuir de Russie is still beautiful, but not the butch aristocrat of yesteryear. Instead, it's as if the Cuir de Russie of 70 years ago earned an advanced degree and spent time on the therapist's couch. She's still elegant and self-possessed, but she's not getting written up in the gossip columns.

Perfumer Ernest Beaux created Cuir de Russie in 1927, six years after Chanel released No. 5. In 1983, Jacques Polge reorchestrated Cuir de Russie, playing down the tougher aspects of its leather and boosting its iris. It's most likely been tinkered with since, including perhaps when it was relaunched as part of the Les Exclusifs line. I'm reviewing a decant taken from a Les Exclusifs bottle purchased a little over a year ago.

Chanel's website describes Cuir de Russie as a "rich, woody oriental" and lists its topnotes as Tunisian orange blossom, Calabrian bergamot, and Sicilian mandarin; its heart as jasmine, Oriental rose, and ylang ylang; and its base as Albanian birchwood. What I smell is a buttery smooth mélange of aldehydes, iris, ylang ylang, glove leather, and a touch of sandalwood.

At first sniff, you know Cuir de Russie is one of the classic Chanels. The creamy aldehydic burst, the restrained floral heart, and the way it wears close to the body, almost becoming a skin scent, mark Cuir de Russie as No. 5's sister. But where No. 5 is sensual, Cuir de Russie feels more intellectual. Its vegetal iris — to me, a thinking person's aroma — plays almost as strong a role as its leather. Its rose and jasmine are only noticeable to me as a cool, smooth background to creamy wafts of ylang ylang and sandalwood. Cuir de Russie's leather is all about worn calf gloves and vintage napa pocketbooks that snap shut, with little of the oily, raw quality of motorcycle jackets and saddles.

Maybe Cuir de Russie is less the "bad girl" these days because leather and smoking don't shock as they once did. Maybe bossy, gambling women wearing suits at midnight don't astonish among the throngs of tattooed, silicone-plumped, sunglasses-at-night partiers these days. Or maybe Cuir de Russie lost some of its moxie during reformulations.

Whatever the case, Cuir de Russie is still beautiful. It stands apart from the hordes of new perfume releases not for daring, but for elegance and luxury. It speaks quietly but confidently, with comfort, subtlety, and intelligence. I guess Piguet Bandit has the roulette wheel all to herself.

Chanel Cuir de Russie is available in a 200 ml bottle of Eau de Toilette as part of Chanel's Les Exclusifs line. For information about where to buy it, see Chanel under Perfume Houses.