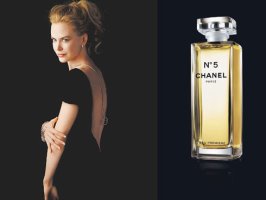 If you want to know what Chanel's new No. 5 Eau Première smells like, try this: take a bottle of Chanel No. 5 Eau de Parfum and position it next to a window, preferably overlooking a hedge of roses, where the sun will cast a pinkish light through the bottle. Now cross the room and squint your eyes so that your vision of the bottle of No. 5 blurs. That is Eau Première.

That didn’t work? Try this: picture in your mind the Andy Warhol painting of a No. 5 bottle. Now imagine it repainted by Renoir. This, too, is Eau Première.

Maybe visual comparisons aren’t for you. Then I’ll quote from the “Fashion Rocks” supplement to this September’s Vogue magazine:

A perfume like Chanel No. 5 is a little like the Beach Boys’ Pet Sounds, an album that did not initially go gold but is considered one of the greatest albums ever made, and has sold a ton over the long run. Similarly, the reformulated Chanel No. 5 Eau Première, launched this fall for a younger market, is akin to a dance-club remix of something written pre-American Idol.

By now you probably get the idea. Eau Première takes the essence of No. 5 — its neroli, roses, jasmine, ylang ylang, amber, vetiver, and sandalwood — and softens it, stripping away the aldehydic edges and the bits that smell of straw-colored Italian wine, to leave an easy-to-sing-along-with version of the original. When you smell Eau Première, you know you smell the direct kin of No. 5. But instead of the elegant auntie that is No. 5, you get her niece, the Homecoming Queen who aspires to a career in public relations.

It’s hard for me to form an opinion of Eau Première without comparing it to No. 5. Eau Première is a little rosier than No. 5, with a more vanillic drydown. It is devoid of any of the charming fustiness of No. 5, and it doesn’t evolve dramatically over time. I don’t find Eau Première as “fresh” or “modern” as the Chanel public relations engine says it is — after all, it’s a friendly floral scent, and we’ve seen those before. But sometimes a person wants basic yellow cake — a good one, made with real butter and fresh eggs — and not some extravagant concoction from the Viennese bakery.

Do I like Eau Première well enough to shell out for a bottle? No, but I certainly understand if you do. It feels to me like a solid, nicely balanced, carefully made scent, and I’d be happy to smell it on anyone around me. Plus, Eau Première wears like a hearty Eau de Toilette, lasting nearly as long as the No. 5 Eau de Parfum I’ve worn at its side.

Let’s go back to the Beach Boys’ Pet Sounds analogy once more. If “God Only Knows (What I’d Do Without You)” is your response to No. 5, then by all means try Eau Première, but don’t expect it to unseat the original. If, on the other hand, you’ve had trouble with No. 5’s aldehydes and feel it is too dated, but something in its classic build of jasmine on roses on a soft, warm base appeals to you, then Eau Première might be perfect.

5 Perfumes for: a Flanker Skeptic