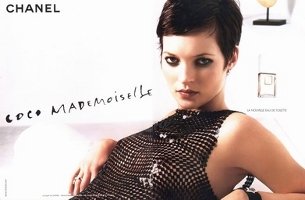 In Perfumes: the A-Z Guide, Luca Turin writes that Chanel Coco Mademoiselle was a quickly assembled flanker, and its success surprised Chanel. However, in Women's Wear Daily1 before Coco Mademoiselle launched, Chanel's "Vice President of fragrance and internet marketing"2 said Coco Mademoiselle could double Coco's business. In the same article, "industry insiders" guessed Coco Mademoiselle might earn as much as $15 million its first year.

Maybe Chanel's statement about doubling Coco's earnings was merely grandstanding for the press, but Women's Wear Daily later reported Coco Mademoiselle raked in $21 million that first year.3 It also broke records by winning the FiFi for Prestige Fragrance in all the FiFi countries — the United States, France, Germany, Spain, Italy, and Great Britain — as well as being awarded the European Star of the Year. Coco Mademoiselle has continued to hold its ground. The NPD Group, a market research firm, listed it as the third best selling fragrance in the United States in 2008. (Chanel No. 5 came in fifth, and Armani Acqua di Gio pour Homme was number one.)

But hey this is a perfume blog, not a business journal, you might be thinking. What does Coco Mademoiselle smell like? It must be pretty good, huh? Jacques Polge, Chanel's house perfumer, created Coco Mademoiselle, and it was released the spring of 2001. It has top notes of bergamot and orange; a heart of jasmine and "morning rose petals"; and a base of patchouli, vetiver, vanilla, and white musk. For my part, although I enjoy catching whiffs of it on others, I'd be happy never to wear it again.

Coco Mademoiselle is marketed to women in their 20s and 30s, leaving Chance to the younger crowd, and Coco and No. 5 to the more mature, I guess. Although Coco Mademoiselle is marketed to younger women — women who might identify with those chosen to front the perfume, including Kate Moss (see above) and Keira Knightley — Coco Mademoiselle has a sophisticated "perfumeyness" about it. Polge deserves proper respect for not dumbing it down that way. But, instead of a soothing and melodious floral heart woven into the oriental base and diffusive, perfumey top, Coco Mademoiselle emits a high-pitched floral smack that doesn't smell of any particular, identifiable combination of flowers. I catch a hint of peach in it, too. In passing, it's pretty and interesting. On my skin, it's like driving with a loose fan belt. It screeches in a way that is fine for a few seconds, but profoundly irritating any longer than that.

For me, the real curse of Coco Mademoiselle is the musk in its base. I like musk in general, but the last couple of years' new releases have taught me I don't like, at all, the bug spray-like musk infesting such fragrances as Lanvin Rumeur, Dolce Gabbana The One, and even Guerlain Idylle. Yesterday it hit me: of course so many new perfumes have the woody-musky base. Coco Mademoiselle is a cash cow. Why wouldn't other perfume companies try to rip it off? Could Coco Mademoiselle have started that trend?

Luca Turin concludes his (four star, by the way) review of Coco Mademoiselle saying, "Mercifully, this style is on its way out." I hope you're right, Mr. T. That said, sales figures show I'm in the minority. That's o.k. There's plenty of Chanel out there for all of us. I'll take Coco, Bois des Iles, and Cuir de Russie, please. 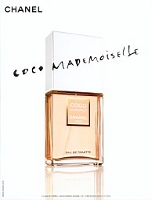 2. They really have a vice president for that?