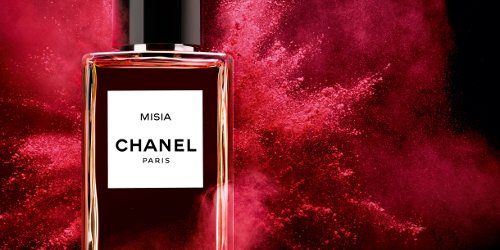 Misia did not create anything, but, through the people she met throughout her life and her magnetic presence alongside artists of the time, she became a muse, a patron and an arbiter of taste for several decades. — Musée d'Orsay

My intention for this fragrance wasn’t so much to recapture Misia herself, but her role as a turning point in the life of Gabrielle Chanel. Misia introduced Gabrielle to a number of new things. With this fragrance, I wanted to convey the atmosphere of the Ballets Russes [of which Misia was a patron] and the smell of makeup from that time. — Olivier Polge1

Misia is the latest from the Les Exclusifs collection at Chanel, and the first release from perfumer Olivier Polge. You may remember that Polge has been named as the successor to his father, Jacques Polge, who has been the Chanel house perfumer since 1978. The fragrance was named for Misia Sert, a friend of Coco Chanel, but I am not going to belabor the backstory — Misia Sert was fascinating, but really "Ballets Russes" and "the smell of makeup from that time" tells you most of what you need to know about the fragrance.

Misia is a cosmetic powder / lipstick accord fragrance, first and foremost. The opening is a cloud of sugared violets set off with sheer berry notes and cut through, briefly, with sharp citrus. It's considerably plusher (and more feminine) than the modern, minimalist powdered violet of Polge's Balenciaga Paris, and the rose in the heart, while it never asserts itself as fully it does in the heavier (and sweeter) Lipstick Rose from Frédéric Malle, lends a richness that sets Misia apart from many of the "fresher" modern department store variations on cosmetic powder, and from the more light-hearted Drôle de Rose from L'Artisan Parfumeur.2

The dry down is woodier and creamier, with a lovely (and very Chanel) iris note, smooth and barely earthy (when I have time, I mean to try layering it with 28 La Pausa). It's also a step warmer and darker than the opening, and despite the benzoin and tonka bean, feels drier and more restrained. The Chanel description mentions "a hint of leather", but it's no more than a suggestion, and even then, think Cuir d'Ange rather than Cuir de Russie.

I don't think anybody will mistake Misia for a vintage fragrance. Still, it seems perfectly calibrated to evoke the vague outlines of a perfume that might have existed in the early 1920s when Gabrielle Chanel accompanied Misia Sert on her honeymoon in Venice. If it does not seem at all likely to be the sort of fragrance that would have appealed to either woman, that is neither here nor there in 2015, is it?

Verdict: Utterly charming, and as a way of introducing Olivier Polge to Chanel's fragrance buying public — or at least, that tiny corner of the fragrance buying public that pays any attention whatsoever to perfumers — I would call it an absolute success (and I for one am looking forward to smelling his first Chanel pillar fragrance). It is markedly different from what Jacques Polge has done with the Les Exclusifs, but it doesn't stray outside the boundaries of the collection: it smells tasteful, elegant, and like it is made from the highest quality raw materials.3 It smells like luxury, and not surprisingly, has a price to match and then some.4 Happily for me, I enjoyed wearing it tremendously but am content with my Drôle de Rose. Now if Chanel ever starts making 15 ml bottles...

The lasting power is good but not fantastic, which seems to be the norm for this collection.

2. Lipstick Rose and Drôle de Rose strike me as being essentially tongue-in-cheek takes on feminine glamour and artifice. Misia doesn't. It isn't dull, but it takes its subject more seriously, and in some ways is easier to wear.

3. Compare to Jessica's review of Guerlain's recent (likewise expensive) lipstick accord fragrance, French Kiss: "French Kiss has a synthetic, shiny quality to it, and if it were a color, it would almost certainly be fuchsia. It's fun, like a new lip gloss, in a way that walks a fine line between chic and trashy...and it costs $260, which is just too much money for something like that. "

4. In 2007, the Exclusifs were $175 for 200 ml, and I thought they were too expensive then. Adjusted for inflation, today those bottles would be $197, but Chanel is charging a whopping $280. Perhaps the cost of materials has gone up faster than inflation, but still, that's quite a jump. Of course, I used to think of the Serge Lutens line as my "barometer" for luxury fragrance prices, and the 50 ml export bottles now range from $130 to $150, and the bell jar of Tubéreuse Criminelle is $310. So what do I know.